Back in September I wrote Snacking on Seaweed after buying a box of Roasted and Salted Seaweed from Costco. I tacked on an addendum to that post about a month later when I bought a second box of 24 packages. Clearly, I really enjoyed the seaweed snack. 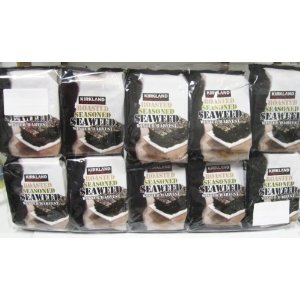 This is what the new Kirkland Seaweed package looks like

The last time I was at Costco there was a new Kirkland Brand of Roasted Seasoned Seaweed for sale. It came in a very large bag which contained 10 smaller packages of the product.

So, what does this all mean to the potential seaweed snacker? A number of things. I have written time and again about reading ingredients labels and paying attention to serving size. This seaweed snack is a perfect example of that.

The first packages I bought contained around 10 of the sheets (5 grams) with the following nutritional breakdown: Only 30 calories, fat 2 grams, no cholesterol, Sodium 50 mg, carbohydrates 1 gram, fiber 1 gram and protein 1 gram.

The new packages are significantly different. They weigh 17 grams not 5 like the original. So a serving of these new ones weighs 3.4 grams. That is less than the originals. Here is the single serving nutritional breakdown: 20 calories, fat 1.5 grams, no cholesterol, Sodium 60 mg, one gram of carbohydrate, no fiber and one gram of protein.

I wanted to write about this new version of the snack to warn you about the potential pitfall of ‘same old; same old.’ The first time I opened a package of the new seaweed, I simply sat down and started snacking. Then I noticed that instead of the usual 10 or so sheets, there were closer to 30 sheets. Holy portion control! Something was wrong. I took a closer look at the package. I was surprised to read, “Serving size about 1/5 of a pack, 3.4 grams….” So, the serving size was smaller, but there were five servings in a pack instead of just one.

That meant that I couldn’t just crack open a pack and down it because I would be eating five servings. Instead of a 20 calorie snack, it would be 100 calories and instead of a friendly 60 mg of Sodium, it would total a not quite so friendly 300 mg. If I hadn’t read the serving size, I could easily have just eaten up the entire package.  They taste that good.

In sum, we have a similar snack sold by the same merchant, but with different packaging and a slow curve on portion size. I can no longer crack open a pack and eat the contents. I now need to weigh out, or count out, one fifth of the package to get a single serving.

Please don’t consider this to be Shakespearean much ado about nothing. I wanted you to see how important it is that you always have to read ‘the fine print.’ Despite the merchant being the same and the package similar, the package size had multiplied by five as did the calories and Sodium.