The global pandemic has changed all aspects of normal living, and ushered in an era where health and wellness are paramount decision drivers for the foreseeable future, especially when it comes to food and beverage choices. The 2021 Pollock Communications and Today’s Dietitian “What’s Trending in Nutrition” survey, with 1,165 registered dietitian nutritionists (RDNs) responding, provides an in-depth look at how dietitians believe consumers’ diets have changed due to COVID-19. The health revolution has exploded as a result of the pandemic, with the top findings for 2021 revealing a focus on foods that support immunity and provide comfort, as well as a major shift in snacking habits. Changes to the top 10 superfoods list also indicate a move toward foods that are plant-forward and support health, with green tea, a natural anti-inflammatory beverage, jumping from #10 last year to the #3 spot this year, and nutrient-rich spinach and leafy greens making their debut on the list. As consumers continue to search for diets that promote well-being and longevity, intermittent fasting surpasses the ketogenic diet as the #1 diet trend dietitians predict for 2021, and RDNs forecast consumers will be on the hunt for natural, clean labels and ingredients like cannabidiol (CBD), collagen and hemp. Here’s a look at the full results.

Diets with higher inflammatory potential were tied to an increased risk of incident dementia, a prospective observational study showed.

Each unit increase in dietary inflammatory index scores was associated with a 21% higher risk of dementia over 3 years (HR 1.21, 95% CI 1.03-1.42, P=0.023), reported Nikolaos Scarmeas, MD, PhD, of Columbia University in New York City and the National and Kapodistrian University of Athens Medical School in Greece, and co-authors.

Diets with higher inflammatory potential were tied to an increased risk of incident dementia, a prospective observational study showed.

People with treatment-resistant hypertension successfully reduced their blood pressure by adopting the Dietary Approaches to Stop Hypertension (DASH) eating plan, losing weight and improving their aerobic fitness by participating in a structured diet and exercise program at a certified cardiac rehabilitation facility, according to new research published in the American Heart Association’s flagship journal Circulation.

Diet and exercise are well-established treatments for high blood pressure. In June 2021, the American Heart Association advised that physical activity is the optimal first treatment choice for adults with mild to moderately elevated blood pressure and blood cholesterol who otherwise have low heart disease risk.

Diet is known to influence heart health. Experts recommend a diet low in sodium and saturated fat to reduce the risk of heart disease. A heart-healthy diet also includes plenty of vegetables, fruits, and whole grains. Research shows that the Mediterranean diet—full of fruits, vegetables, fish, cereals, and legumes, with little meat and dairy—may reduce the risk of heart disease.

A team led by Dr. James M. Shikany of the University of Alabama at Birmingham examined whether dietary patterns are associated with the risk of sudden cardiac death. The study was funded by NIH’s National Institute of Neurological Disorders and Stroke (NINDS), National Institute on Aging (NIA), and National Heart, Lung, and Blood Institute (NHLBI). Results were published in the Journal of the American Heart Association on July 6, 2021.

The researchers analyzed the diets of more than 21,000 participants using a food questionnaire at the start of the study. Participants were asked how often and in what quantities they ate 110 foods in the past year. Both those with and without a history of coronary heart disease were included. Participants were part of the long-running REGARDS (REasons for Geographic and Racial Differences in Stroke) study.

Tagged as diet, fruits and vegetables

Diet is known to influence heart health. Experts recommend a diet low in sodium and saturated fat to reduce the risk of heart disease. A heart-healthy diet also includes plenty of vegetables, fruits, and whole grains. Research shows that the Mediterranean diet—full of fruits, vegetables, fish, cereals, and legumes, with little meat and dairy—may reduce the risk of heart disease.

A team led by Dr. James M. Shikany of the University of Alabama at Birmingham examined whether dietary patterns are associated with the risk of sudden cardiac death. The study was funded by NIH’s National Institute of Neurological Disorders and Stroke (NINDS), National Institute on Aging (NIA), and National Heart, Lung, and Blood Institute (NHLBI). Results were published in the Journal of the American Heart Association on July 6, 2021.

Migraine is one of the largest causes of disability in the world. Existing treatments are often not enough to offer full relief for patients. A new study published in The BMJ demonstrates an additional option patients can use in their effort to experience fewer migraines and headaches – a change in diet.

“Our ancestors ate very different amounts and types of fats compared to our modern diets,” said co-first author Daisy Zamora, PhD, assistant professor in the UNC Department of Psychiatry in the UNC School of Medicine. “Polyunsaturated fatty acids, which our bodies do not produce, have increased substantially in our diet due to the addition of oils such as corn, soybean and cottonseed to many processed foods like chips, crackers and granola.”

Key tips to a healthy lifestyle

One picture us worth a thousand words. In this case, I think the infographic counts for even more. I hope this is all old news to you and you are living it fully. As an 81 year old I can tell you that I am certainly glad to have adopted my healthy lifestyle for the past 10 years. It’s never too late. The body is an organic machine which means there is constant regeneration going on. Use it to your advantage.

Simple, but not so easy …

Simple, but not so easy, at least for some of us …. The following infographic is from the National Institute on Aging. While it doesn’t tell you anything you don’t already know, I think it is worthwhile to see these items enumerated to impress our minds – and bodies – what gives us the best chance of having a long and healthy life.

We cannot survive without cholesterol in our bodies. It is an essential part of cell walls, is used to make bile acids (which are critical in fat digestion), and is necessary for the production of vitamin D and a number of hormones according to Tufts Health & Nutrition Letter. But too much LDL cholesterol and not enough HDL cholesterol in the blood is associated with increased risk for heart attack and stroke. While the liver can produce all the cholesterol the human body needs, we also consume it in the form of animal-based foods like meat and dairy.

You’ve probably heard the expression, “you are what you eat,” but what exactly does that mean? Put simply, food is fuel, and the kinds of foods and drinks you consume determine the types of nutrients in your system and impact how well your mind and body are able to function according to Mental Health America.

Avoid: Sugary drinks and excessive amounts of caffeine. Sugary drinks have empty calories and damage tooth enamel. Caffeine should also be avoided in excess, as it can trigger panic attacks in people who have anxiety disorders.

Try to: Drink at least 8 glasses of water a day (about 2 liters) to prevent dehydration. Studies show that even mild dehydration can cause fatigue, difficulty concentrating, and mood changes1, in addition to physical effects like thirst, decreased or dark urine, dry skin, headache, dizziness and/or constipation. Limit caffeine if you have an anxiety disorder. If you feel like you need some caffeine, try tea. Tea has lower amounts of caffeine than coffee and has lots of antioxidants-chemicals found in plants that protect body tissues and prevent cell damage.

Scientists at Imperial College London in collaboration with colleagues at Northwestern University, University of Illinois, and Murdoch University, analyzed levels of 46 different so-called metabolites in the urine of 1,848 people in the U.S.

Metabolites are considered to be an objective indicator of diet quality — and are produced as different foods are digested by the body, say the research team, who published their findings in the journal Nature Food.

The work was funded by the U.S. National Institutes of Health and Health Data Research UK.

What Happens to the Body When we Diet?

The body starts to respond to healthy dietary changes as soon as they are made. This can be advantageous, because a diet can then eventually reduce the risk of obesity, diabetes and heart disease, as well as improve a person’s overall sense of well­ being. 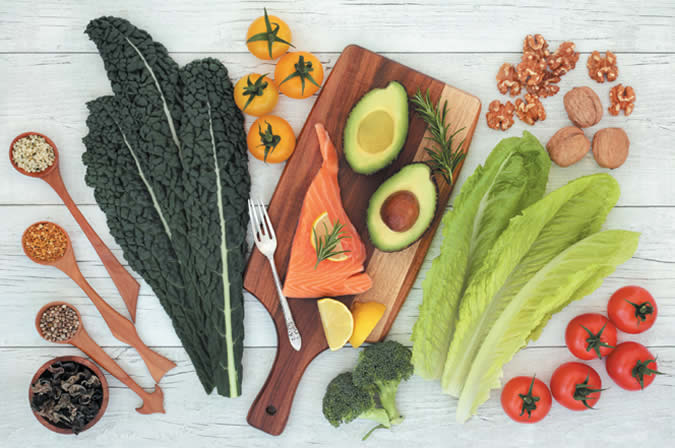 END_OF_DOCUMENT_TOKEN_TO_BE_REPLACED

“We have found that there is increasing evidence of a link between a poor diet and the worsening of mood disorders, including anxiety and depression. However, many common beliefs about the health effects of certain foods are not supported by solid evidence”.

The researchers found that there are some areas where this link between diet and mental health is firmly established, such as the ability of a high fat and low carbohydrate diet (a ketogenic diet) to help children with epilepsy, and the effect of vitamin B12 deficiency on fatigue, poor memory, and depression.

They also found that there is good evidence that a Mediterranean diet, rich in vegetables and olive oil, shows mental health benefits, such as giving some protection against depression and anxiety. However, for many foods or supplements, the evidence is inconclusive, as for example with the use of vitamin D supplements, or with foods believed to be associated with ADHD or autism.

END_OF_DOCUMENT_TOKEN_TO_BE_REPLACED

What, Exactly, is a Mediterranean Diet? – Tufts

I have been hearing about and reading about the benefits of the Mediterranean Diet for as long as I have been writing this blog (10 years in case you are new here). But, I don’t know a heck of a lot about it. Here is the skinny from Tufts Health & Nutrition Letter.

More than a diet plan, this health-promoting food pattern allows room for preferences.

This large and diverse region includes 22 countries located within Europe, Africa, and Asia, including Greece, France, Spain, and Italy, but also Turkey, Morocco, Libya, and Egypt. “It is important to recognize that these countries encompass a wide array of cultural and culinary traditions, which means there is no single version of the ‘Mediterranean’ diet,” says Alice Lichtenstein, DSc, a professor at Tufts’ Friedman School of Nutrition Science and Policy and executive editor of Tufts Health & Nutrition Letter. “The good news is, that means a Mediterranean-type dietary pattern can be adapted to many different tastes and preferences.” END_OF_DOCUMENT_TOKEN_TO_BE_REPLACED

It’s that time of year, so here goes. I don’t have a lot of confidence in New Year’s resolutions, because I try to live that way year ’round. If, however, you feel that you have been slipping, here are some wonderful positive tips from the Tufts Health and Nutrition Letter:

“According to surveys, the two most popular New Year’s resolutions involve losing weight and getting fit—and for good reason. Moving toward a healthier dietary pattern and being more physically active are crucial steps toward achieving well-being—with or without weight loss.”