One of my pet peeves – Bad Dice

pet peeve
noun informal
something that a particular person finds especially annoying.
“one of my biggest pet peeves is poor customer service”

Do you have any pet peeves? You know, those actions or situations that just make you crazy. Why can’t they get it right? Of course, possibly the most frustrating aspect of the pet peeve is that very few other folks share your feeling. At least, that seems to be my experience.

This is one of my pet peeves. It may seem very insignificant to you and maybe it is, but I find this really bothersome. You can be the judge. Is this totally neurotic of me, or does it indicate something that just isn’t right with the world?

My pet peeve is the graphic depiction of dice – done incorrectly. I don’t know when I realized that there are correct dice and incorrect pictures of dice, but ever since I noticed it, incorrect depictions of dice make me crazy. Following are examples: 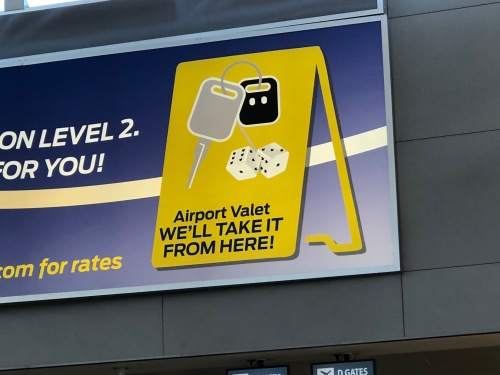 This is in the McCarran airport in Las Vegas.

I bought the shirt below at the theater in New York where I saw Guys and Dolls, Damon Runyon’s classic story about gamblers who get involved in a giant dice game. I couldn’t believe the dice.

The truth of it is utterly simple.

This is an accurate die. Notice that on the sides exposed you can not add up to a total of seven.

As you can see: They continued on the soundtrack album

When a die is constructed correctly whatever number is on the top has a corresponding number on the bottom that adds up to seven. So, if there is one on top, the bottom number is six. Two on top, five on the bottom. So simple. But apparently not easy for some artists.

The ad agency that created the sign in the McCarran Airport in Las Vegas couldn’t take the time – to get a pair of real dice – in Las Vegas. They screwed up their illustration.

Likewise, the company that produced the Guys and Dolls shirt – about gambling – couldn’t be bothered with getting a pair of real dice to reproduce on its product. Also, while I don’t have a photo, they used the same shot on the marquee outside the theater where it was performed.

How would you like to carry incorrect dice around your entire life?

Sorry, but I find this kind of carelessness intolerable.

There, I got it off my chest. Thanks for taking the time to read this. Feel free to share your thoughts on this in the comment section below.

For the record: Yes, I gamble. Regular readers know that I go to Las Vegas around four times a year. Have been playing there since the late 60’s. When I first went there, all I played was craps, betting against the dice and laying the odds. I don’t any longer. Video poker is my game now.

2 responses to “One of my pet peeves – Bad Dice”