“Few fast-food items have achieved the cultural prominence of the McRib. Object of satire, conspiracy theory, and fevered online speculation, the McRib typically appears on McDonald’s menus with great fanfare only to vanish, fleetingly, some time later,” according to the Center for Science in the Public Interest (CSPI).

“As Ian Bogost wrote in The Atlantic, we experience the McRib as (quasi-)foodstuff, as marketing campaign, as cult object, as Internet meme, but those experiences don’t sufficiently explain it. 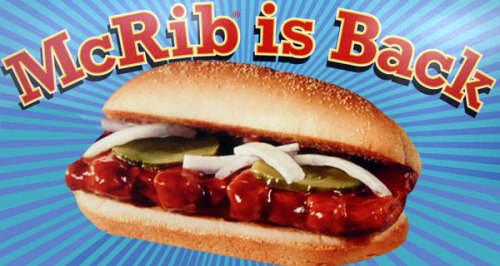 “To better explain the McRib, the Center for Science in the Public Interest has taken a closer look at a few of its chemical ingredients. There’s more to the McRib, it turns out, than bun, pork, sauce, pickles and onions.

“McRib Pork Patty: BHA, propyl gallate, and citric acid are used as preservatives in the patty. While citric acid is safe, CSPI recommends that consumers avoid BHA (butylated hydroxyanisole) and propyl gallate. The Food and Drug Administration permits the use of BHA in food, even though its parent agency, the Department of Health and Human Services, says that BHA is “reasonably anticipated to be a human carcinogen.” It is often used with propyl gallate to prevent fats and oils from spoiling. CSPI says that propyl gallate may be an endocrine disruptor and needs to be better studied.

“McRib Sauce: After water, the main ingredient in the sauce is high-fructose corn syrup. It’s not true that HFCS is worse than regular sugar, but CSPI recommends everyone cut back on both. Xanthan gum, which is secreted by bacteria, is safe, at least in this application. (Used in a product called SimplyThick, it has caused problems in infants.) Sodium benzoate appears to be safe, though it causes allergic reactions in sensitive individuals. It is unclear exactly which of several caramel color varieties is used in McRib Sauce, but when it is produced with ammonia, carcinogenic contaminants form. That’s been a problem in caramel-colored soft drinks, but regardless of how the caramel coloring in McRib Sauce was produced, the amount one would consume is small and not a problem. Good for McDonald’s for using beet powder to color the sauce instead of Red 3 (a carcinogen) or Red 40 (one of several dyes which in Europe must be labeled as having “an adverse effect on activity and attention in children”). END_OF_DOCUMENT_TOKEN_TO_BE_REPLACED

What Are Some Tips For Eating Out?

I recently reblogged a post on eating healthy while traveling. What about the local traveling we all do when we decide to eat out? That can be just a trying an experience when it comes to eating healthy.

The Academy of Nutrition and Dietetics has some worthwhile ideas. 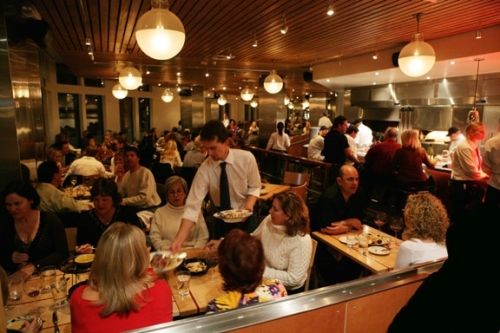 They suggest making physical activity an integral part of dining out. If you walk from home or office, you can get your meal and some minutes of physical activity and avoid parking hassles in the bargain. Walking with family or friends gives you time to chat while a stroll after dinner helps digestion.

The all important concept of portion size looms large on The Academy’s radar.

“Becoming sensible about serving sizes is an important way to maintain a healthy weight and it’s good for your wallet too.
• Instead of a large entrée, order an appetizer and a leafy green salad or choose two appetizers for a meal.
• Start with a small serving like a cup of soup, a junior burger or a small order of fries. If you are still hungry, order something else.
• Indulge your inner child: Order a kid’s meal at a fast-food restaurant. Many now offer a choice of low-fat milk and fruits or vegetables instead of fries.
• Savor your steak twice as much. Eat half at the restaurant, then take the other half home to enjoy sliced onto a green salad or as a sandwich on whole-grain bread.
• Ask for a to-go box as soon as your meal is served. Put half your food into the container for a second meal. That’s two meals for the price of one.
• Share from start to finish. Order one appetizer for the whole table and then order one dessert with multiple forks. Sometimes, just a bite or two is perfect.
• Share an entrée. You can ask your server to split the meal in the kitchen or divide it up yourselves at the table.”

There is nothing inherently wrong about eating out, you  just need to be extra careful about ordering. The foregoing guidelines can help you.

When you eat as important as what you eat … Study Most weight-loss plans center around a balance between caloric intake and energy expenditure. However, new research has shed light on a new factor that is necessary to shed pounds: timing. Researchers from Brigham and Women’s Hospital (BWH), in collaboration with the University of Murcia and Tufts University, have found that it’s not simply what you eat, but also when you eat, that may help with weight-loss regulation. The study will be published on January 29, 2013 in the International Journal of Obesity.

“This is the first large-scale prospective study to demonstrate that the timing of meals predicts weight-loss effectiveness,” said Frank Scheer, PhD, MSc, director of the Medical Chronobiology Program and associate neuroscientist at BWH, assistant professor of medicine at Harvard Medical School, and senior author on this study. “Our results indicate that late eaters displayed a slower weight-loss rate and lost significantly less weight than early eaters, suggesting that…

Tagged as calories, meal timing, weight, weight-loss, what you eat, when you eat