Tag Archives: too much sitting

I learned about the dangers of prolonged sitting a while back and have posted several times on it as well as created a Page – Do You Know the Dangers of Too Much Sitting? which you can check out at your leisure to learn more about this fascinating subject.

It’s nice to see the Wall Street Journal take up the issue, “Studies have found that sedentary behavior, including sitting for extended periods, increases the risk for developing dozens of chronic conditions, from cancer and diabetes to cardiovascular disease and nonalcoholic fatty liver disease. Some ergonomics experts warn that too much standing also can have negative effects on health, including a greater risk for varicose veins, back and foot problems, and carotid artery disease.” 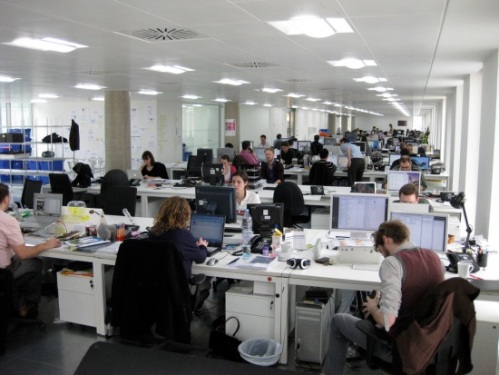 I was interested to see that prolonged standing is also a no-no.

It seems our bodies were created to move and that is all there is to it.

I find this fascinating. I would have thought that regular exercise would solve the problem, but no. The Journal notes that, “Various studies have shown that even regular exercise won’t compensate for the negative effects from sitting too much during the day. Sitting causes physiological changes in the body, and may trigger some genetic factors that are linked to inflammation and chronic conditions such as diabetes and cardiovascular disease, said Dr. Buckley, of the University of Chester. In contrast, standing activates muscles so excess amounts of blood glucose don’t hang around in the bloodstream and are instead absorbed in the muscles, he said.”

While the danger of prolonged sitting may seem too subtle for some to take very seriously, I think it is very worthwhile information. So many people feel they suffer from mysterious maladies. This is clear cut science that removes a layer of the mystery from some of those maladies.

I am thrilled that my Apple Watch reminds me every hour with a Time to Stand reminder. You can achieve the same thing with a timer at your desk. (I put together a page on How My Apple Watch is Good for Your Health) with lots more aspects of healthy living.

The Journal also mentioned wearing a headset and walking in the office while talking on the phone rather than just sitting at your desk. Likewise, small meetings can be held while walking rather than cooped up in an office.

Clearly folks with desk jobs have some thinking to do on the subject.

As the saying (here in America) goes, things happen in threes. I assume that is good things as well as bad. I think of this post as the third in a series of subtle reminders on the benefits of movement, active leisure, good posture, etc. which I have posted about in the past few days. On Sunday, I posted about The Physiologic Link Between Heart Disease and a Sedentary Lifestyle, and on Saturday, the Importance of Good Posture.

It is important to remember how much our bodies need activity.

“How you spend your free time may affect how much life time you have to spend. While nothing beats regular exercise, a new Swedish study reports that older adults who are more active in their leisure time were less prone to cardiovascular problems and lived longer than their sedentary peers. The benefits were seen regardless of whether the seniors also engaged in vigorous exercise. END_OF_DOCUMENT_TOKEN_TO_BE_REPLACED

Tagged as active leisure, aging, sedentary, too much sitting, Tufts

How Posture Affects Your Spine – Infographic

My mother was always saying, “Stand up straight.” Turns out she was right. Here are some useful facts on posture.

Tagged as posture, sitting, spine, too much sitting

Sitting Is Killing You – Infographic

I posted on the dangers of Sitting Too Much earlier this week.

Now comes this awesome infographic with even more info on it. If it appears small to you, double click on it and it will blow up (at least it did on my Mac.)

Some of the items include: “Sitting 6+ hours a day makes you up to 40% likelier to die within 15 years than someone who sits less than three. Even if you exercise.”

Tagged as sitting, too much sitting, weight control, weight-loss