I have written numerous times about the risks of soft drinks, both sugary and chemical laden “sugar free” ones.

The study examined data from 96,000 participants in the Nurses’ Health Study II and found that womenwho consumed more than two sugar-sweetened beverages a day had more than double the risk of developing early-onset colorectal cancer when compared with women who drank less than one sugary drink a week.

According to the study, each 8-ounce sugary drink consumed per day was linked to a 16% higher risk of early-onset colorectal cancer. The researchers also found that the effects were particularly striking among teenagers who drank sugary beverages: Each daily serving consumed between ages 13 and 18 was associated with a 32% higher risk of early onset of the disease.

In a July 18, 2021, article in Prevention, lead author Jinhee Hur, a research fellow in the Department of Nutrition, suggested swapping sugary drinks for water, milk, or unsweetened coffee or tea. Hur also noted that eating less red and processed meat and minimizing alcohol consumption may help mitigate the risk of colorectal cancer.

Colorectal cancer diagnoses have increased among people under age 50 in recent years and researchers are seeking reasons why. A new study has found a link between drinking sugar-sweetened beverages and an increased risk of developing colorectal cancer in women under age 50. The findings suggest that heavy consumption of sugary drinks during adolescence (ages 13 to 18) and adulthood can increase the disease risk.

Colorectal cancer diagnoses have increased among people under age 50 in recent years and researchers are seeking reasons why. A new study led by Washington University School of Medicine in St. Louis has found a link between drinking sugar-sweetened beverages and an increased risk of developing colorectal cancer in women under age 50. The findings suggest that heavy consumption of sugary drinks during adolescence (ages 13 to 18) and adulthood can increase the disease risk.

Sweet success: Heavy consumption of sugary beverages declined in the US from 2003 to 2016

Finally, there is some good news to report on our addiction to sugary beverages in this country.

You’ve probably heard the expression, “you are what you eat,” but what exactly does that mean? Put simply, food is fuel, and the kinds of foods and drinks you consume determine the types of nutrients in your system and impact how well your mind and body are able to function according to Mental Health America.

Avoid: Sugary drinks and excessive amounts of caffeine. Sugary drinks have empty calories and damage tooth enamel. Caffeine should also be avoided in excess, as it can trigger panic attacks in people who have anxiety disorders.

Try to: Drink at least 8 glasses of water a day (about 2 liters) to prevent dehydration. Studies show that even mild dehydration can cause fatigue, difficulty concentrating, and mood changes1, in addition to physical effects like thirst, decreased or dark urine, dry skin, headache, dizziness and/or constipation. Limit caffeine if you have an anxiety disorder. If you feel like you need some caffeine, try tea. Tea has lower amounts of caffeine than coffee and has lots of antioxidants-chemicals found in plants that protect body tissues and prevent cell damage.

The more sugar-sweetened beverages (SSBs) people consumed, the greater their risk of premature death—particularly death from cardiovascular disease, and to a lesser extent from cancer, according to a large long-term study of U.S. men and women. The risk of early death linked with drinking SSBs was more pronounced among women.

The study, led by Harvard T.H. Chan School of Public Health, also found that drinking one artificially sweetened beverage (ASB) per day instead of a sugary one lowered the risk of premature death. But drinking four or more ASBs per day was associated with increased risk of mortality in women.

The study was published in the journal Circulation.

“Our results provide further support to limit intake of SSBs and to replace them with other beverages, preferably water, to improve overall health and longevity,” said Vasanti Malik, research scientist in the Department of Nutrition and lead author of the study. END_OF_DOCUMENT_TOKEN_TO_BE_REPLACED

I  have written repeatedly about the dangers of soft drinks, both sugary and artificial sweeteners. You can search the subject by punching soft drinks into the S E A R C H box at the right.

Drinking more than one soft drink daily — whether it’s regular or diet — may be associated with an increase in the risk factors for heart disease, Framingham researchers reported in Circulation: Journal of the American Heart Association. 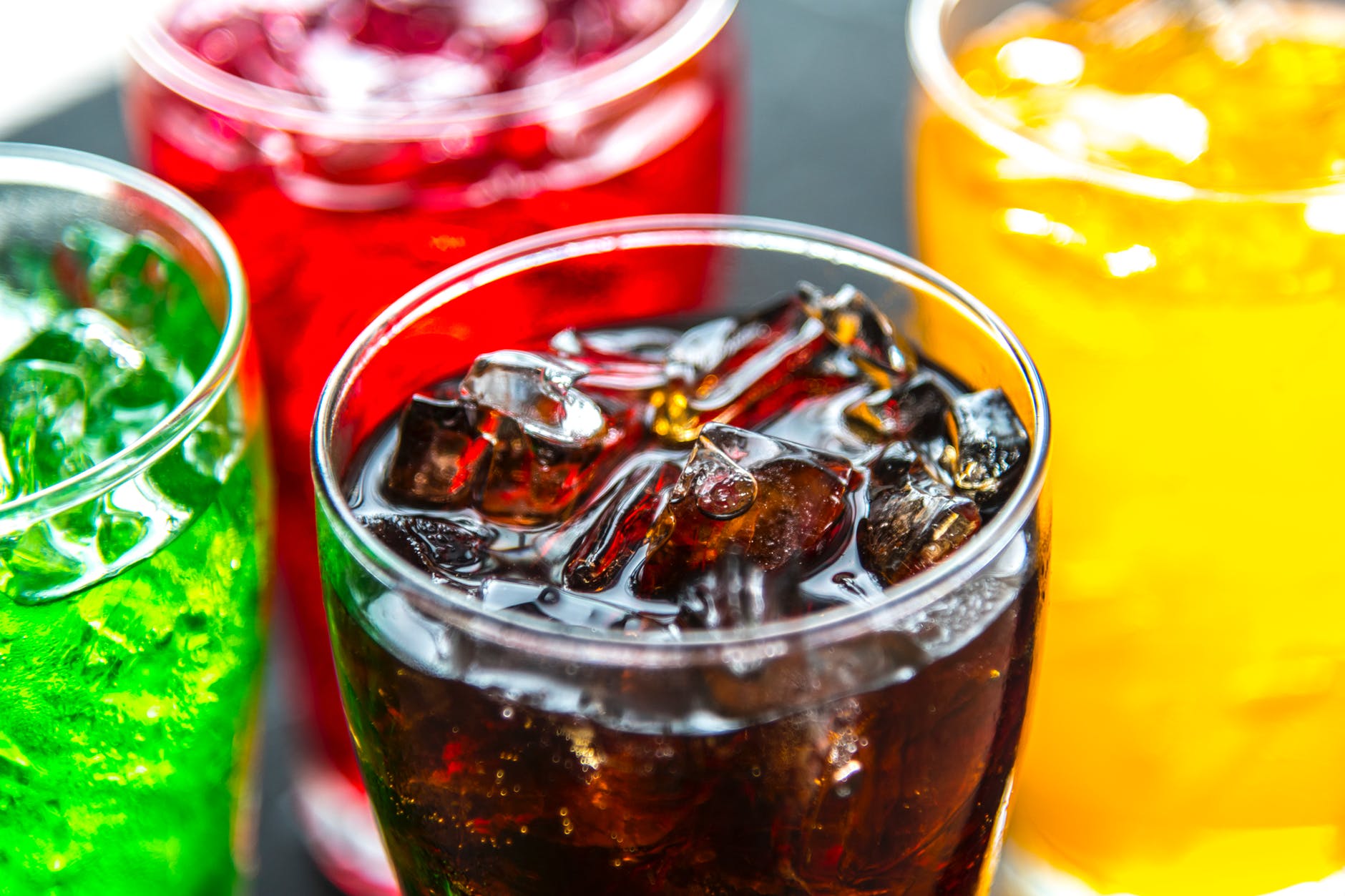 “We were struck by the fact that it didn’t matter whether it was a diet or regular soda that participants consumed, the association with increased risk was present,” said Ramachandran Vasan, M.D., senior author of the Framingham Heart Study and professor of medicine at Boston University School of Medicine. “In those who drink one or more soft drinks daily, there was an association of an increased risk of developing the metabolic syndrome.”

END_OF_DOCUMENT_TOKEN_TO_BE_REPLACED

The findings suggest that fruit and other foods containing fructose seem to have no harmful effect on blood glucose levels, while sweetened drinks and some other foods that add excess “nutrient poor” energy to diets may have harmful effects.

Photo by GEORGE DESIPRIS on Pexels.com

“These findings might help guide recommendations on important food sources of fructose in the prevention and management of diabetes,” said Dr. John Sievenpiper, the study’s lead author and a researcher in the Clinical Nutrition and Risk Factor Modification Center of St. Michael’s Hospital in Toronto, Canada. “But the level of evidence is low and more high quality studies are needed.”

The role of sugars in the development of diabetes and heart disease attracts widespread debate and increasing evidence suggests that fructose could be particularly harmful to health.

Fructose occurs naturally in a range of foods, including whole fruits and vegetables, natural fruit juices and honey. It is also added to foods, such as soft drinks, breakfast cereals, baked goods, sweets, and desserts as ‘free sugars’.

Current dietary guidelines recommend reducing free sugars, especially fructose from sweetened beverages, but it is unclear whether this holds for all food sources of these sugars. END_OF_DOCUMENT_TOKEN_TO_BE_REPLACED

How soda impacts your body – Infographic

I haven’t posted anything on soft drinks for a while, yet they remain popular. If you need more, check out my Page – What’s wrong with soft drinks? 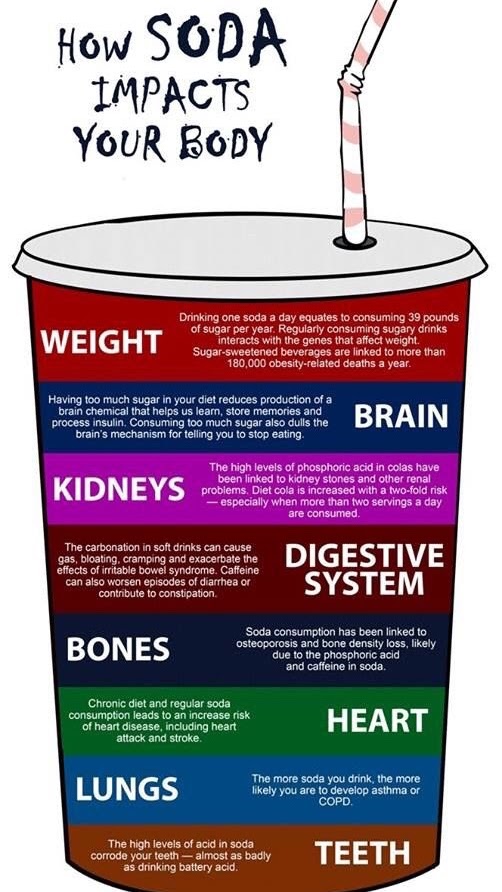 How to beat your sugar addiction – Infographic

Sweets for the sweet sounds better than it really is. I think to a greater or lesser extent, people of my generation have something of a sugar addiction. Unfortunately, we are hard-wired to like sweet tastes. The fact that food purveyors are aware of this can sometimes create a problem.

If you get nothing else from this post, remember, 4 grams of sugar equals one teaspoonful. So, all you need to do is divide by four and you can see how many teaspoons full sugar you are getting in those soft drinks, pastries, etc.

Per Capita Consumption Drops More Than 26% From 1998 Peak

Regular readers know that I feel strongly about the dangers of soda, both diet and sugared. You can check out my Page: What’s Wrong with Soft Drinks? to learn more about it.

I was pleased to read the Center for Science in the Public Interest (CSPI) report that sales are declining.

Americans, eager to reduce their risk of diabetes, heart disease, obesity, and tooth decay are continuing to cut down on their consumption of full-calorie soda, according to new data released by the trade publication Beverage Digest. Based on those data, the nonprofit Center for Science in the Public Interest says that Americans are drinking more than one-fourth less soda than in 1998, when consumption peaked. In fact, Americans are now back to drinking about as much as they did in 1985. CSPI is urging health officials at the local, state, and federal levels of government to enact policies to drive down soda consumption even further, perhaps to levels observed in the 1960s, when soda was an occasional treat served in reasonable portions.

“Drinking nine or 10 teaspoons of sugar makes no sense, and most Americans have wised up to what’s really in a single soda,” said CSPI president Michael F. Jacobson. “The soda industry, which for years has lectured the public about energy balance and moderation, has been marketing excessive consumption, both in terms of frequency and volume. A comprehensive government strategy to drive down consumption further could be a boon to Americans’ health and lower the healthcare costs paid by taxpayers.”

Lawmakers in California are proposing a two-cent-per-ounce health impact fee on sugar-sweetened beverages in that state. In Philadelphia, Mayor Jim Kenney (D) is proposing a three-cent-per-ounce excise tax on sugary drinks to help raise $400 million over five years for universal Pre-K, parks, and other programs. In Congress, Rep. Rosa DeLauro (D-CT) has offered legislation that would institute a tax of one-cent per teaspoon of caloric sweetener. CSPI has estimated that a federal excise tax could raise $10 billion a year for prevention programs.

I don’t share the CSPI’s notion of getting the government more involved in affecting what private citizens eat and drink through raising taxes or any other way. This is still a free country. Let’s keep it that way. It seems like we are off to a good start judging from the fall off in sales in the past 20 years.

Handy Guide to Sugar in Food and Drinks – Infographic

This has a ton of good information in it regarding the amount of sugar in various foods and drinks we consume. If you take nothing else from it, take the four grams of sugar = one teaspoon full. You can use that every time you check the nutrition label on food or drink.

Can you believe the Dr. Pepper Slurpee? – 225 grams of sugar!

How Does Sugar Affect My Body? CSPI

Because most nutrition labels give the sugar content in grams, here is the translation:

Grams to teaspoons: There are 4.2 grams of sugar in one teaspoon.

In case it isn’t obvious to you in the section – 385 Calories consumed daily from added sugars…. It is the combination of the four exercises mentioned: walking, basketball, biking and jogging to burn off those 385 calories, not any single one of them.

You can take a very cool quiz on sugar right now. I posted it earlier this week.

As regular readers know, I don’t drink sugary or diet soft drinks and consider them some of the most damaging junk foods available.

A Nashville family’s rap video is the winner of a contest aimed aimed at raising awareness of the harmful health effects of overconsumption of sugary drinks.  The winning video “Just Pour One Out” features an original rap song from the Sullivan family, inspired by 41-year-old stay-at-home dad Peter Sullivan’s personal struggle with soda consumption.

“I was surprised by how much the process changed my drinking habits,” Sullivan said of making the film.

Announced by the nonprofit Center for Science in the Public Interest in October 2012, the Pour One Out video contest invited the public to produce short videos demonstrating the pouring out of sugary drinks in a creative way.  Advertising pioneer Alex Bogusky joined CSPI staff in judging contest entries based on creativity, originality, and effectiveness of the health message.  CSPI offered a $1,000 prize for the winning film, and $500 and $250 prizes for the second- and third-place films.

The runner up video