What Happens in Las Vegas …

No, this time it isn’t staying there. I have been in Las Vegas for the past couple of days and thought there might be some value in sharing a few of the details of my trip with you. Certainly the exercise part.

I had a nice view of the Eiffel Tower and the Las Vegas strip from my room.

First and foremost, I am not able to ride 20 miles a day on my bike. So, my body is not going to get its usual super cardio workout. I am staying at the Paris Hotel which offers health club facilities so I have been using that. Guess what, although I am a seasoned bike rider, 20 minutes on the exercise bike here wears me out. How can that be? Is it the extra helpings of goodies at the buffet, or the late nights at Jersey Boys taking their toll?

No. My first instinct was to feel guilty about having fun and over indulging which was damaging my conditioning.

Although there are no signs posted anywhere in the health club, or in the city for that matter, no one mentions the fact that Las Vegas is 2000 feet above sea level. The air is thinner. Air compresses under pressure. At sea level there is greater pressure than there is 2000 feet above, so while there is the same amount of oxygen in the air, the molecules are farther apart and you get less oxygen when you breathe.

Basketball fans know about this regarding the Denver Nuggets who play in Mile High Stadium. It is harder for visiting teams to keep up with the home team because of the elevation. While Las Vegas is only about 40 percent as high as Denver, there is more oxygen available, but less than we are used to at sea level. The effect is more subtle and more unexpected.

As you can imagine I was gratified to learn this elevation fact, as I thought my body had begun going to seed after only one night of overindulgence. The second and third mornings I did the treadmill instead of the bike to get some weight-bearing work, too.

Cracked crab legs at Joe’s were part of my overindulgence.

You need to drink more water in the higher altitude and pay attention to alcohol consumption as drinks pack more wallop higher up. Just what you need in Las Vegas, right? 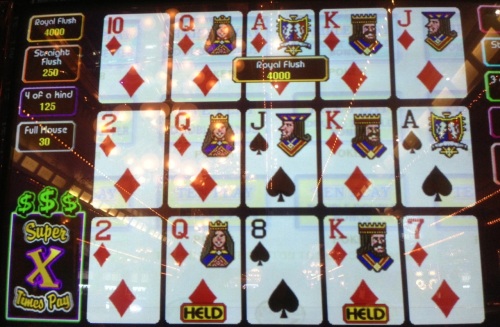 My game of choice is video poker. The Royal Flush is a jackpot winner. Chances of catching a Royal when holding only two cards are one in 16,215.

So, it is possible to exercise and eat well without losing your conditioning. You just need to be alert and not overdo it on either end of the spectrum.

What is the Most Balanced Exercise Program?

The more I read and write about exercise, the more the element of balance becomes important. Exercise if crucial to our well being, but it is easy to overdo it, or use bad technique and set ourselves back with an injury. Heaven knows I have had biking injuries galore.  So what is the most balanced exercise program, let me count the options.

Among the possibilities, are walking, running, weight lifting, bicycling, yoga, tennis, kick-boxing to name a few. 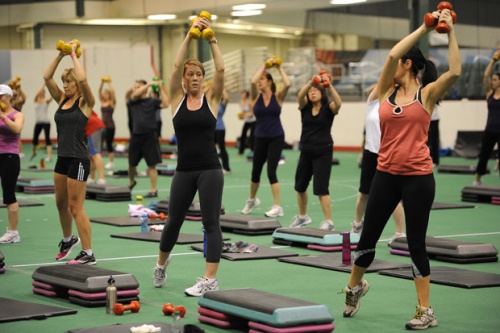 “All three are important. Aerobic or “cardio” (walking, jogging, cycling, swimming, tennis, basketball) boosts the strength of your heart and lungs; strength or “resistance” training (weight lifting, resistance band exercises, etc.) help to keep your muscles and bones strong, and help with balance and coordination; and flexibility exercises (yoga, stretching, tai chi) can improve your range of motion and reduce your risk for injury.”

You can take the WebMD test on Fitness Do’s and Dont’s at the link.

I really like their breakdown because I consider walking to be the Cinderella sister of exercises. Everyone does it to some extent, but very few people appreciate the benefits.

Here are some of my posts on walking.

Benefits of Walking and Cycling

Walking, not Sudoku for Seniors

Thanksgiving – The Morning After

I thought this graphic made a lot of sense to follow up the overindulgence that has been known to occur on Thanksgiving Day. You can click on it to see full size.

Start the day right, be it Black Friday or any day.