I saw Moneyball last week because I am a sports fan and have enjoyed other books by Michael Lewis. I liked the film a lot. Really good cast, including Brad Pitt, Robin Wright, Philip Seymour Hoffman all of whom gave some fine performances. Fascinating story about how using statistics revolutionized strategy in major league baseball. Super screen writer Steve Zaillian did a really good job, too.

The most striking scenes for me, however, took place between Brad Pitt and Kerris Dorsey his early teenaged daughter in the film. Pitt’s character is divorced and he is clearly working to keep up his relationship and loves his daughter very much. 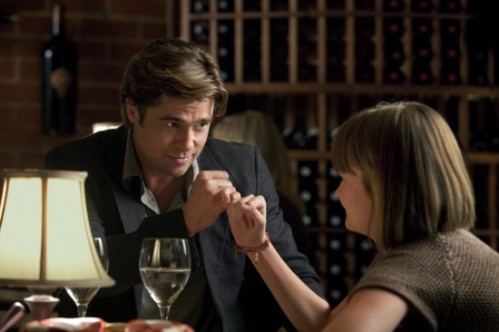 There was one scene in which they go shopping for a guitar. In the store, she tries one, picking out some notes and humming along with it. Pitt suggests she sing the words. She agrees with some reluctance. To her small accompanying guitar notes she sings in her little girl voice, “I’m just a little bit caught in the middle, Life is a maze and love is a riddle, I don’t know where to go, can’t do it alone, I’ve tried and I don’t know why …”