5 ways to protect your eyes from AMD – Harvard

At 77, I have had minimal problems with my eyes. Sound of me knocking on wood. I get my eyeglass prescription boosted every so often so I can read the fine print, but other than that, no problemmo.  Here is Harvard Medical School on Age-related macular degeneration.

Age-related macular degeneration (AMD) is a condition in which the macula, the part of the eye that’s responsible for your sharpest and most detailed vision, begins to thin and break down, causing vision loss. If left untreated, it can lead to blindness.

There is no surefire way to prevent AMD. However, there are things you can do to delay its onset or reduce its severity. Here are 5 of our favorites: END_OF_DOCUMENT_TOKEN_TO_BE_REPLACED

5 Myths about your eyes – Harvard

Here’s something  you haven’t seen here before, information about your eyes. And, yet, our eyes are arguably our most important sense.

Harvard Healthbeat says, “Of your five senses, which one are you most afraid of losing? If you’re like most people, your answer is your ability to see. Because our eyesight is so precious, it’s no wonder that myths abound about what can damage our eyes — and what can protect them. Here, we debunk five common myths — and tell you how to truly keep your eyes healthy. 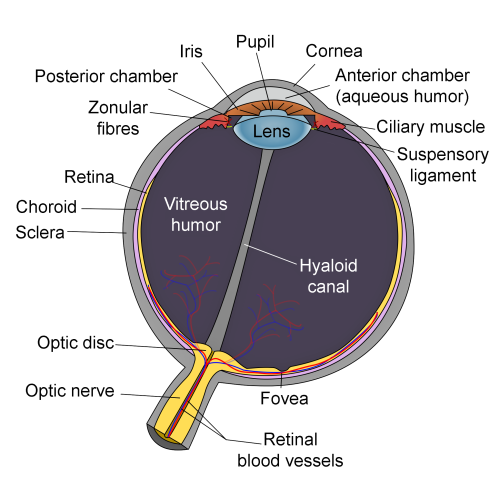 Blood Vessels in the Eye Linked With IQ, Cognitive Function

The width of blood vessels in the retina, located at the back of the eye, may indicate brain health years before the onset of dementia and other deficits, according to a new study published in Psychological Science, a journal of the Association for Psychological Science.

Research shows that younger people who score low on intelligence tests, such as IQ, tend to be at higher risk for poorer health and shorter lifespan, but factors like socioeconomic status and health behaviors don’t fully account for the relationship. Psychological scientist Idan Shalev of Duke University and colleagues wondered whether intelligence might serve as a marker indicating the health of the brain, and specifically the health of the system of blood vessels that provides oxygen and nutrients to the brain.

To investigate the potential link between intelligence and brain health, the researchers borrowed a technology from a somewhat unexpected domain: ophthalmology.

Why Am I Seeing Flashes of Light in My Eye?

The somewhat frightening question in the headline was one I confronted Monday night. Driving home from work I began seeing flashes of light, something akin to lightening bolts, out of the corner of my left eye.

I was going to work out that night, but I headed for a hospital emergency room instead.

As luck would have it, there was no ophthalmologist in the emergency room and all Evanston Hospital (in my Chicago suburb) could do was call one ophthalmologist and also call my ophthalmologist and ask them for opinions on the phone. This after telling me the flashes could mean my retina was detaching, which in turn could cause me to go blind in my left eye if surgery wasn’t performed quickly to reattach it.

I wanted an answer that night about whether I needed surgery, but I could not get one. Plus I had to try to sleep that night without moving my head for fear of causing further damage to my retina.

The next morning, I was at my ophthalmologist’s office at 8 a.m. even though she was not scheduled to arrive until that afternoon. I said I would see the first available doctor and did, a bit later.

The good news is that my retina is fine, for now. What’s happening to me happens to some people as we age. In simple terms, we have a gel-like substance in our eyes that liquefies as we get older. Normally it’s a smooth process but sometimes the gel tears away from the retina rather than just melting, something like pieces of ice falling off an iceberg.

If they fall too suddenly, they can tear the retina and cause it to detach, which puts you at risk for going blind.

I now will be having my eyes looked at every four weeks or so to ensure my retina remains where it’s supposed to be. And the flashes may start in my right eye soon, too. As I understand the doctors, these never go away; they just become something I will become accustomed to and not notice as much as I do now.

If you start seeing flashes in one or both eyes, do get them examined as soon as possible, quick action could save your vision.
John