As regular readers know, I love infographics. Also, I am a big fan of pineapple juice and pretty much drink some every day, so I was impressed by the infographic below saying pineapple juice was 500% more effective than cough syrup for stifling a cough. However, a nagging little voice in my head said, that sounds like pie in the sky, check it out further. So I went to Snopes – the definitive internet reference source for urban legends, folklore, myths, rumors and misinformation.

Sure enough. It ain’t so. 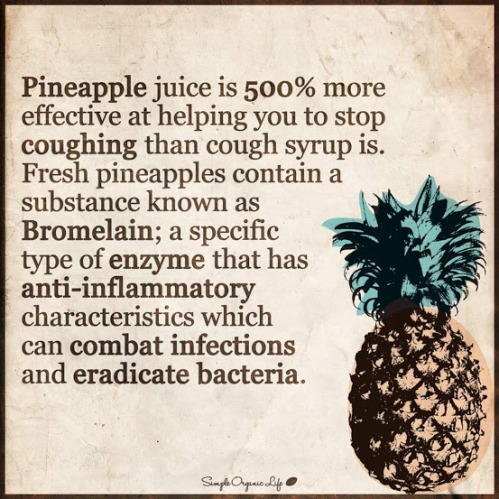 This information is not accurate.

Here is some of what Snopes has to say:

“Most articles proffering this claim reference a research study conducted in 2010, but locating the data in question has proved difficult. Few articles linked to any evidence, and more often than not they merely provided links to additional unsourced articles about the purported cough-battling properties of pineapple juice. One iteration referenced a particular study before adding that a second (unspecified) study bolstered the first:

“Drinking pineapple juice helps soothe a sore throat and aids the body to expel mucous easily. Thick and stubborn mucus in your lungs or sinuses can cause seemingly endless spasms of coughing, sneezing and painful infections. In a study published in “Der Pharma Chemica” in 2010, researchers attempted to find beneficial treatments for patients who have tuberculosis, an infectious disease often caused by Mycobacterium tuberculosis. As part of their studies, they discovered that a mixture of raw pineapple juice, pepper, salt and honey given to patients every day helped to dissolve the mucus in the lungs.

“While we were unable to locate any other research indicating “patients recovered 4.8 times faster” when treated with pineapple juice in lieu of cough syrup, the source material (to which nearly all other claims referred) appeared to be a 2011 article from a small publication called Der Pharma Chemica. The article did not seem to be a study as such, and its title had nothing to do with pineapple juice (“Use of Secondary Metabolite in Tuberculosis: A Review”).

“The quote above represents the entirety of the “study” so commonly cited that purportedly proves pineapple juice outstrips cough syrup on a number of efficacy metrics. How that brief and vague mention about its helpfulness in dissolving mucus (in an unrelated article about tuberculosis) morphed into a ringing endorsement of Dole over Dimetapp is anyone’s guess. It’s possible pineapple juice will someday be deemed beneficial for cough symptoms in the course of a study, but we found no current research proving pineapple juice is five hundred percent, five times, or any other multiplier more effective than cough syrup at alleviating cough symptoms, suppressing cough, dissolving mucus, or hastening recovery time from a cold. ” (Emphasis mine.)

Just so you don’t get the wrong idea, I like pineapple juice and recommend that you drink it for health purposes. Just don’t think it will fix your cough.

Livestrong.com says, “Pineapple juice contains enzymes that can help digest proteins and offer anti-inflammatory benefits. Depending on whether you buy natural juice, or it has extra vitamin C added, just one serving of pineapple juice provides 30 to over 100 percent of your daily vitamin C. For the best health benefits, look for fresh or canned pineapple juice that does not have added sugar or preservatives.”

Filed under pineapple juice as a cold cure