I guess this would have to be filed in the Something We Need Like Another Hole in the Head Department. Wrigley, a subsidiary of Mars, Inc., has launched a chewing gum with 40 milligrams of caffeine per piece and 8 pieces per box. The average cup of coffee has 100 mg, so just one of these amounts to 40 percent of a cup of coffee.

As you can see from the ad, the product is being advertised for free at 7-Eleven with the purchase of a Skinny Salted Caramel Mocha or other large hot — and presumably caffeinated— beverage! I was not able to nutritional info on this drink, nor the amount of caffeine. 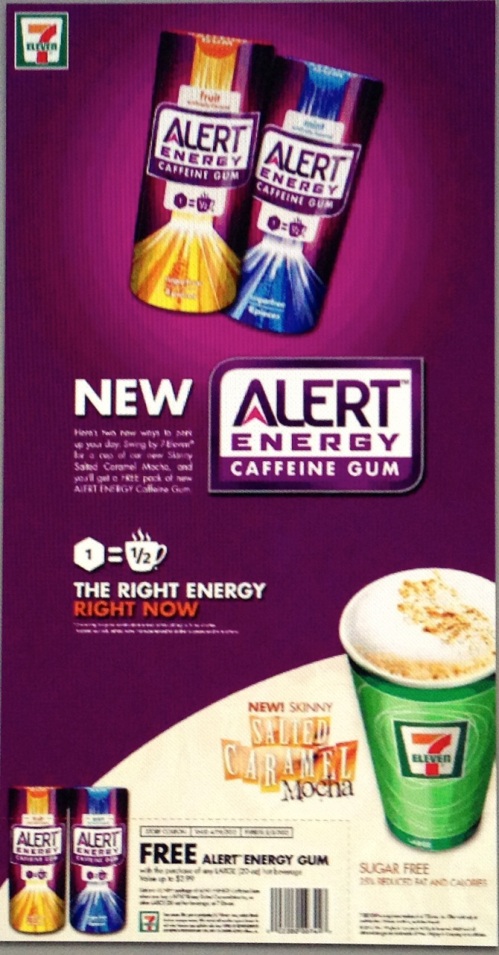 The Center for Science in the Public Interest (CSPI) pointed out that The American Academy of Pediatrics discourages the consumption of caffeine and other stimulant substances in the diets of children and adolescents.  Too much caffeine can cause anxiety, restlessness, irritability, and insomnia in just about anyone, according to CSPI.

The release is perfectly timed to come out right around final exam time for kids everywhere.

Large amounts of caffeine can cause rapid heartbeat and seizures that are severe enough to require emergency care.  While the FDA has regulations governing caffeine in cola-type beverages, those regulations did not anticipate the widespread caffeination of the food supply.

As I oppose Red Bull and all those other stimulant drinks, I have to say this gumming up chewing gum idea really takes the cake. The opportunities for getting too much caffeine are rife. If you were to take all eight pieces you would have chewed up 320 mg of caffeine, more than three cups of coffee with caffeine.

These are a dangerous idea for adults and reckless for kids.