Uncontrolled blood pressure, diabetes may be common among people with heart failure – AHA

Many people with heart failure also have diabetes or high blood pressure. But new research suggests those conditions, even when treated, aren’t well controlled, placing people at risk for worsening heart problems, according to the American Heart Association (AHA).

“We know that controlling hypertension and diabetes is critical for people with heart failure,” said Dr. Madeline Sterling, a primary care physician at Weill Cornell Medicine in New York City. “But few studies have been able to ascertain how well those risk factors have been controlled. This study really takes a big step forward in doing that.”

Heart failure occurs when the heart can’t pump as well as it should and fails to deliver enough oxygen to the body, making it harder for people to perform everyday tasks. Hypertension, another name for high blood pressure, and diabetes are major risk factors for heart failure, which affects more than 6 million people in the U.S., especially those who have other heart problems or who have had heart attacks.

In the new study, researchers analyzed 18 years of data from the National Health and Nutrition Examination Survey, a series of federal studies assessing the prevalence of major diseases and their risk factors among U.S. adults.

While just 8% of 1,423 people diagnosed with heart failure had poor glycemic control, defined in the study as a hemoglobin A1C level of 8% or higher, 21% of those being treated for diabetes failed to meet blood glucose goals. This did not vary by race or ethnicity.

Researchers also found 48% of people with heart failure had uncontrolled hypertension, which the researchers defined as a systolic blood pressure, the top number in a reading, of at least 130. Among people prescribed blood pressure-lowering medication, poor control was even higher, at 51%. Black adults had higher uncontrolled rates than their white peers, at 53% compared to 47%.

“This speaks to a larger problem, which is a systemic failing to control the leading risk factors that account for the greatest number of non-communicable deaths worldwide,” said Khan, an assistant professor of medicine at Northwestern University Feinberg School of Medicine in Chicago.

“The reasons for these disparities are manifold,” said Dr. Leah Rethy, a resident physician at the University of Pennsylvania Perelman School of Medicine and lead author of the study. They include the history of structural racism in the U.S., which is largely responsible for disparities in access to health care, proximity to green spaces where people can safely meet exercise goals and “all sorts of things that influence somebody’s life course up until the time they get heart failure,” she said.

While the vast majority of people in the study had insurance, they also reported incomes below the poverty line, which could affect their access to quality care or the ability to pay for medications, said Sterling, who was not involved in the research. The study also did not track whether people being treated for high blood pressure and diabetes were actually taking the medications prescribed to them.

The study documented only the prevalence of uncontrolled blood pressure and poor glycemic control, not why those risk factors were uncontrolled, Rethy said.

“We think there’s probably a number of reasons that include a lack of understanding or focus from providers about the importance of blood pressure control, but also perhaps a lack of accessibility to consistent and affordable primary and specialty care for adults with heart failure,” she said, “particularly those under age 65 who don’t qualify for Medicare.”

Sterling added that “it’s actually quite hard to control these risk factors. It’s not just a matter of giving people medications. This study is shedding light on this.”

Many people who have heart failure are older, frail and may have cognitive issues, so it may be difficult for them to perform the extensive self-monitoring needed to manage their health, she said. “A lot is put on patients to manage this at home, and it’s a challenge.”

But that doesn’t mean it’s an insurmountable one, Rethy said. The key is finding ways to help health care professionals and patients put into practice what researchers know about how to get blood pressure and blood glucose levels under control.

“There are many good medications and lifestyle interventions that we know work,” she said. “We shouldn’t think of it as too lofty to achieve. We have access to lots of tools to help fix it.”

One in three American adults has hypertension (high blood pressure). And, because hypertension causes few obvious symptoms, many people with high blood pressure don’t even know it. What’s more, only about half of all diagnosed individuals are controlling their blood pressure adequately. This condition is a primary or contributing cause in more than 1,000 deaths each day and costs the nation $48.6 billion each year, according to the Centers for Disease Control and Prevention. But, straightforward lifestyle changes can both prevent and treat this common and devastating “silent killer.” 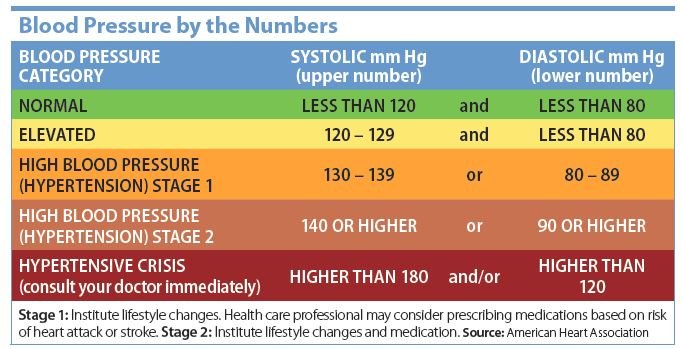 What is Blood Pressure? “Blood pressure is the force the blood exerts on the walls of the arteries,” says Sondra M. DePalma, DHSc, PA-C, a cardiology PA with PinnacleHealth CardioVascular Institute at UPMC Pinnacle and an author of the American Heart Association’s 2017 Guideline for the Prevention, Detection, Evaluation, and Management of High Blood Pressure in Adults. The top number (the systolic pressure) is the force exerted on the artery wall with each beat (contraction) of the heart. The bottom number (the diastolic pressure) is the force when the heart is at rest (between beats). If readings rise above 120 systolic and 80 diastolic, risks begin to rise. Treatment through lifestyle changes and/or medication is recommended if numbers rise over 130 or over 80. [For more information on blood pressure readings, see Blood Pressure by the Numbers.

END_OF_DOCUMENT_TOKEN_TO_BE_REPLACED

Over 500 new gene regions that influence people’s blood pressure have been discovered in the largest global genetic study of blood pressure to date, led by Queen Mary University of London and Imperial College London.

Involving more than one million participants, the results more than triple the number of blood pressure gene regions to over 1,000 and means that almost a third of the estimated heritability for blood pressure is now explained.

High blood pressure is a major risk factor for stroke and heart disease and was responsible for an estimated 7.8 million deaths worldwide in 2015. While lifestyle risk factors are relatively well-known and include obesity, smoking, alcohol and high salt-intake, high blood pressure is also highly heritable through genetics. Prior to this study however, the genetic architecture of blood pressure had not been well understood. END_OF_DOCUMENT_TOKEN_TO_BE_REPLACED

Medical researchers at Trinity College Dublin, Ireland, are advising caution when treating blood pressure in some older people — after results from a study contrasted with recent advice from the U.S. to attempt to aggressively lower blood pressure in all adults to targets of 120mmHg.

Researchers from the Irish Longitudinal Study on Ageing (TILDA) at Trinity College Dublin, in collaboration with Beaumont Hospital, Dublin, have recently published the findings in the Journal of the American Medical Association (JAMA Internal Medicine).

A large randomized blood pressure trial led by U.S. investigators — the Systolic blood Pressure Intervention Trial (SPRINT) — demonstrated that lowering systolic blood pressure to levels of 120mmHg or less compared with 140mmHg or less in adults (over 50 years with cardiovascular risk) significantly reduced death (from all causes and from heart failure and heart attacks). The study also reported that common side effects of low blood pressure such as falls, injuries, blackouts, and drops in blood pressure after standing were not increased by aggressive treatment — even in people over 75 years old.

Because the latter findings were clinically counter intuitive, the TILDA team tested whether they held true outside of a trial setting. Focusing on people in Ireland over 75 years, they examined rates of falls, injuries, blackouts and excessive drops in standing blood pressure in those who met the criteria for the treatment proposed in SPRINT and were followed up with for 3½ years — the same time period as SPRINT.

The researchers reported starkly contrasting results — falls and blackouts were up to five times higher than reported in SPRINT and drops in blood pressure on standing were almost double that reported in SPRINT. Therefore, in people over 75 years, intensive lowering of blood pressure to 120mmHg could result in harm and TILDA researchers recommend that a better understanding of who, over 75 years, will or will not benefit, is necessary before widespread adaptation of the SPRINT results.

The TILDA team is now assessing how best to determine which people may benefit from SPRINT, and which people are more at risk from aggressive blood pressure lowering.

First author of the journal article, Research Fellow at TILDA, Dr. Donal Sexton, said: “SPRINT was a landmark study of hypertension treatment. While the benefits of lowering blood pressure seen in this study are not in dispute, we are highlighting to physicians that we need to be cognizant of the fact that the trial was not powered for adverse events such as falls causing injury. Physicians ought not to expect a similarly low rate of adverse events in clinical practice as was observed in the trial when lowering blood pressure in older people. Overall what we are saying is that the risks and benefits of lowering blood pressure should be individualized for each patient.”

Professor Rose Anne Kenny, founding Principal Investigator with TILDA and lead author of the journal article commented: “Our work and that of other groups has shown that low blood pressure and particularly drops in standing blood pressure are linked not only to falls, fractures and fall- and blackout-related injuries, but also to depression and possibly other brain health disorders.”

“These outcomes can seriously impact on independence and quality of life and we advise caution in applying the SPRINT recommendations to everyone over 75 years without detailed assessment of an individual’s risk versus possible benefit until such a time as we can provide more clarity re treatment.”

Advances in technology have made it possible for us to take measurements of our body that previously we had to rely on doctor visits to get done. This is a positive development that saves us time and money – on the assumption that we can do as accurate a measurement as the hospital. Seems that is not necessarily the case with home blood pressure monitors.

Seventy per cent of readings from home blood pressure monitors are unacceptably inaccurate, which could cause serious implications for people who rely on them to make informed health decisions, new UAlberta research reveals.

“High blood pressure is the number one cause of death and disability in the world,” said medical researcher Jennifer Ringrose, who led the research study. “Monitoring for and treating hypertension can decrease the consequences of this disease. We need to make sure that home blood pressure readings are accurate.” (my emphasis)
END_OF_DOCUMENT_TOKEN_TO_BE_REPLACED

“Compared to those with poor blood pressure status, those who were ideal had a 60 percent lower risk of future stroke,” Cushman said.

Making small lifestyle changes could reduce your risk of having a stroke, according to a new study in the American Heart Association journal Stroke.

“We used the assessment tool to look at stroke risk and found that small differences in health status were associated with large reductions in stroke risk,” said Mary Cushman, M.D., M.Sc., senior author and professor of medicine at the University of Vermont in Burlington.

Researchers divided the Life’s Simple 7 scores into three categories: zero to four points for inadequate, five to nine points for average, and 10 to 14 points for optimum cardiovascular health.