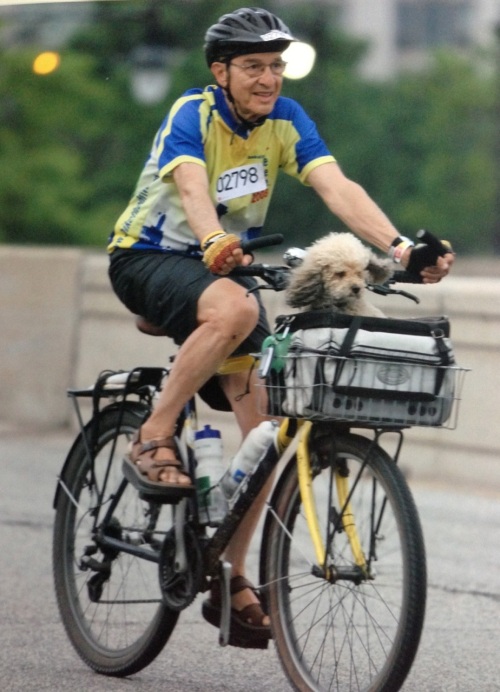 My go-to exercise is biking. My dog comes along when the weather is willing. At 79, everything seems to be working …

Some experts believe that risk factors for heart disease also are risk factors for dementia and late-life cognitive decline and dementia. Recently, researchers examined two potential ways to slow the development of CIND based on what we know about preventing heart disease. They published the results of their study in the Journal of the American Geriatrics Society.

The research team had a theory: That the healthy lifestyle behaviors that slow the development of heart disease could reduce heart disease risk and also slow cognitive decline in older adults with CIND. These behaviors include regular exercise and a heart-healthy diet, such as the DASH (Dietary Approaches to Stop Hypertension) diet.

In order to investigate their theory, the researchers designed a study titled “Exercise and NutritionaL Interventions for coGnitive and Cardiovascular HealTh EnhaNcement” (or ENLIGHTEN for short). The goal of the study was to examine the effects of aerobic exercise (sometimes known as “cardio” or “cardiovascular” exercise because it involves activities that increase the circulation of oxygen through the blood) and the DASH diet on cognitive functioning in older adults with CIND.

The ENLIGHTEN study examined 160 adults 55-years-old or older. The study participants were older adults who didn’t exercise and had memory problems, difficulty thinking, and making decisions. They also had at least one additional risk factor for heart disease, such as high blood pressure (also known as hypertension), high cholesterol, diabetes, or other chronic conditions.

Participants took a number of tests to measure their heart disease risk factors and cognitive ability. Researchers also assessed participants’ dietary habits and ability to perform daily activities. The participants were then randomly assigned to one of four groups: a group doing aerobic exercise alone, a group following the DASH diet alone, a group doing aerobic exercise and following the DASH diet combined, or a group receiving standard health education.

People in the exercise group did 35 minutes of moderate intensity aerobic exercise (including walking or stationary biking) three times per week for six months. They were supervised for three months and then exercised unsupervised at home for three months. Participants in the exercise group did not receive any counseling in the DASH diet and were encouraged to follow their usual diets for six months.

People in the DASH eating plan group received instruction about how to meet DASH guidelines in a series of weekly sessions for three months and then bi-weekly for the remaining three months. Participants in the DASH group were asked not to engage in regular exercise until the completion of the six-month study.

People in the exercise and DASH group followed the exercise and DASH programs for six months. The participants who were enrolled in the health education group received weekly educational phone calls for three months and then bi-weekly calls for three months. Phone calls were conducted by a health educator on health topics related to heart disease. Participants were asked to maintain their usual dietary and exercise habits for six months until they were re-evaluated.

At the conclusion of the six-month intervention and assessment, participants were free to engage in whatever activity and dietary habits they desired, with no restrictions.

The researchers concluded that their findings are promising proof that improved ability to think, remember, and make decisions can last one year after completing a six-month exercise intervention. They suggested that further studies would be needed to learn more.