Walking may be a key clinical tool in helping medics accurately identify the specific type of dementia a patient has, pioneering research has revealed.

For the first time, scientists at Newcastle University have shown that people with Alzheimer’s disease or Lewy body dementia have unique walking patterns that signal subtle differences between the two conditions. 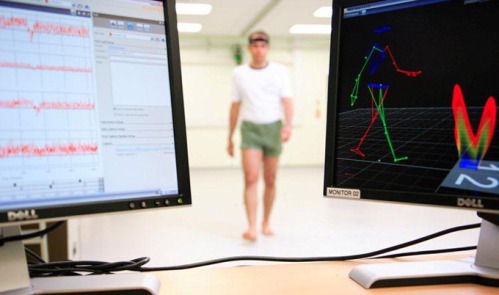 The research, published in Alzheimer’s & Dementia: The Journal of the Alzheimer’s Association, shows that people with Lewy body dementia change their walking steps more – varying step time and length – and are asymmetric when they move, in comparison to those with Alzheimer’s disease.

It is a first significant step towards establishing gait as a clinical biomarker for various subtypes of the disease and could lead to improved treatment plans for patients.

She said: “The way we walk can reflect changes in thinking and memory that highlight problems in our brain, such as dementia.

“Correctly identifying what type of dementia someone has is important for clinicians and researchers as it allows patients to be given the most appropriate treatment for their needs as soon as possible.

“The results from this study are exciting as they suggest that walking could be a useful tool to add to the diagnostic toolbox for dementia.

“It is a key development as a more accurate diagnosis means that we know that people are getting the right treatment, care and management for the dementia they have.”

Current diagnosis of the two types of dementia is made through identifying different symptoms and, when required, a brain scan.

For the study, researchers analyzed the walk of 110 people, including 29 older adults whose cognition was intact, 36 with Alzheimer’s disease and 45 with Lewy body dementia.

Participants moved along a walkway – a mat with thousands of sensors inside – which captured their footsteps as they walked across it at their normal speed and this revealed their walking patterns.

People with Lewy body dementia had a unique walking pattern in that they changed how long it took to take a step or the length of their steps more frequently than someone with Alzheimer’s disease, whose walking patterns rarely changed.

When a person has Lewy body dementia, their steps are more irregular and this is associated with increased falls risk. Their walking is more asymmetric in step time and stride length, meaning their left and right footsteps look different to each other.

Scientists found that analyzing both step length variability and step time asymmetry could accurately identify 60% of all dementia sub types – which has never been shown before.

Further work will aim to identify how these characteristics enhance current diagnostic procedures, and assess their feasibility as a screening method. It is hoped that this tool will be available on the NHS within five years.

Dr James Pickett, Head of Research at Alzheimer’s Society, said: “In this well conducted study we can see for the first time that the way we walk may provide clues which could help us distinguish between Alzheimer’s disease and Lewy body dementia.

“This research – funded by the Alzheimer’s Society – is pioneering for dementia. It shows promise in helping to establish a novel approach to accurately diagnose different types of dementia.

“We know that research will beat dementia, and provide invaluable support for the 850,000 people living with the condition in the UK today. It’s now vital that we continue to support promising research of this kind.

“We look forward to seeing larger, longer studies to validate this approach and shed light on the relationship between a person’s gait and dementia diagnosis.”

Dementia describes different brain disorders that triggers loss of brain function and these conditions are usually progressive and eventually severe.

It is estimated by the Alzheimer’s Society that people living with dementia in the UK will rise to more than one million by 2025.

Future research at Newcastle University will look at alternative methods to assess walking as part of the €50 MOBILISED-D digital monitoring project, led by Professor Lynn Rochester, which aims to develop a system of small sensors that can be worn on the body during daily routine to assess how well you walk – a sign of health and wellbeing.

Father-of-four and grandfather-of-two John Tinkler has lived with Lewy body dementia for the past three years.

The 70-year-old, of Langley Park, County Durham, was diagnosed after starting to experience difficulties walking when he began to shuffle his feet and would regularly trip over.

John, his wife, Jenny, 59, and the rest of their family, have learned to cope with the difficult diagnosis and have had to adapt their lifestyles accordingly.

Jenny, a physiotherapist, said: “Since John’s diagnosis things have been difficult and, over the years, he has deteriorated to the point where he fatigues easily, which affects his mobility, balance and coordination, and he is now struggling to get out of an armchair. In addition to this, he has joint pain and muscle cramps.

“When we were asked if John would like to take part in the Newcastle University research we didn’t hesitate to say ‘yes’ because it’s important that people do their bit to help research.

“The findings of the study are exciting because it can help lead to a definitive diagnosis of the subtype of dementia, which will allow patients to be on the right management programme as early as possible.

“If patients and their families know the specific type of dementia they are dealing with, this enables there to be a greater understanding of the specific needs of the person living with the condition.

“We are extremely lucky to live in an area where research into ageing is among the best there is. It would be fantastic if a screening tool like this was available within the NHS for dementia patients.”