What happens in Vegas …

I am just back from Las Vegas. As regular readers know, when I go to Las Vegas, what happens there doesn’t stay there. I share my experiences, some anyway. My girlfriend and I stayed at Caesars Palace in the Augustus Tower. I like that tower because we get a view of the fountain at Bellagio. The photo below is what I saw out our windows.

These sprays dance to music.

We had some amazing meals there. Below is the soft shell crab roll at Nobu, Caesars’ superb sushi restaurant. Say that five times fast.

We didn’t catch a show this time, but we always take in a movie. I have been going to movies for years there. My friend, Marc, on one of our trips said that we should see a movie because we would probably save $300 that we would have lost gambling in the two hours we spent watching it. Ever since then, I have caught a flick on every trip.

This time we saw Long Shot, Charlize Theron’s wonderful new film. I am a big fan of Charlize for her incredible beauty as well as superb acting skills. In Long Shot she plays the Secretary of State with ambitions for the White House. Seth Rogen is also in it, an unlikely pairing that somehow worked for me. I recommend it. 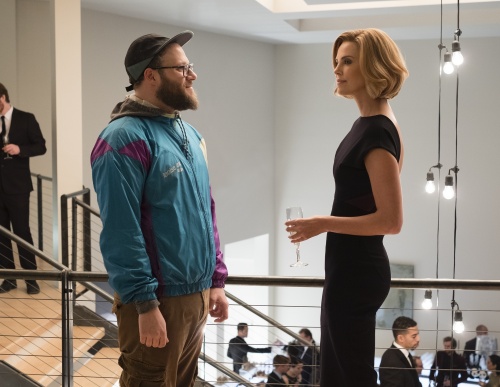 My girlfriend and I saw Atomic Blonde with Charlize on a prior trip. You may be able to catch it on Netflix or Amazon Prime. She plays a secret agent and the film boasts the best fight scenes I have ever seen. Yes, she punches out guys twice her size.

Having been going to Las Vegas since the ’60’s, I have played all the games, craps, blackjack, slots. Currently, I pretty much confine myself to video poker. I previously wrote about the agony and the ecstasy of VP which you can read about here if you would like to learn more about the game. I rarely play the slots as the modern machines have such strange configurations, I can’t figure most of them out. The one exception is the Green Machine which simply spins blank reels and when a dollar amount pops up, you get paid that. I call it the WYSIWYG machine – What You See Is What You Get. You can see from the photo below, I got lucky on this one.

Wayne Newton was appearing at Cleopatra’s Barge. Yes, he is still alive. I was surprised, too. I think he has been appearing in Las Vegas since I first started going there in the late 1960’s.

I have written about the Food Court at Caesars previously. Most mornings I stop there for one of their amazing crepes.

I consider this a lovely way to start the day.

In closing, I wanted to share one wonderful winning VP hand. For the math-curious, the chances of being dealt four of a kind are one in 4165. 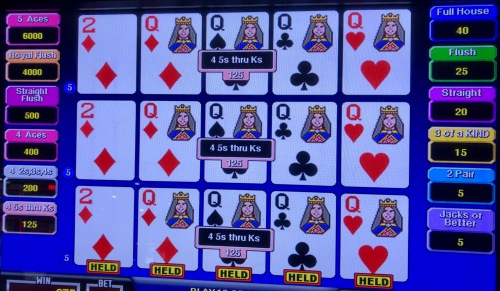