Ever been a tourist in your home town?

I have lived in Chicago for 76 of my 78 years, so I pretty much know the town. Riding my bike on the lakefront gives me a chance to interact with tourists who mostly want directions to our local sights, like Navy Pier, Buckingham Fountain, etc. This weekend I kind of experienced the ‘tourist thing’ when I took my girlfriend to the restaurant at the top of the Hancock Building  – on the 95th Floor. As you can imagine, this is one of the major Chicago tourist attractions. Also, I hadn’t actually eaten there ever in my life.

“From the 95th floor restaurant, diners can look out at Chicago and Lake Michigan. The Observatory (360 Chicago), which competes with the Willis Tower’s Skydeck, has a 360° view of the city, up to four states, and a distance of over 80 miles (130 km). The Observatory has Chicago’s only open-air SkyWalk and also features a free multimedia tour in six languages. The 44th-floor sky lobby features America’s highest indoor swimming pool,” according to Wikipedia

Herewith some pics of this tourist attraction and out dinner with its attendant fabulous views. 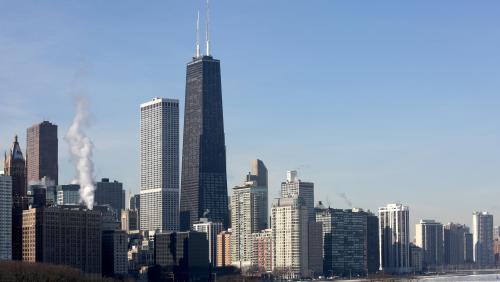 Looking south over the city. You can see the shoreline of Lake Michigan on the upper left.

This was the city view looking west. Remember, we were at the lakefront which comprises the eastern border of Chicago.

One very pleasant surprise was the quality and presentation of our dinner. Being a tourist attraction, I was pleasantly surprised that they furnished first rate food as well.

This was tuna tartare. Girlfriend’s appetizer.

It’s hard to tell from this picture, but you are looking at a wonderful seafood pasta papardelle. It had a light lemon-lime sauce. Delicious!

I was pretty nautical, having lobster bisque for a starter and then these wonderful seared scallops for my entree.

Comments Off on Ever been a tourist in your home town?