Regular readers know that I have posted numerous times on the value of exercise not only for our bodies, but also for our brains. On the top of this page is IMPORTANT FACTS ABOUT YOUR BRAIN.

If you click on that link you can find a page full of blog posts on the subject. 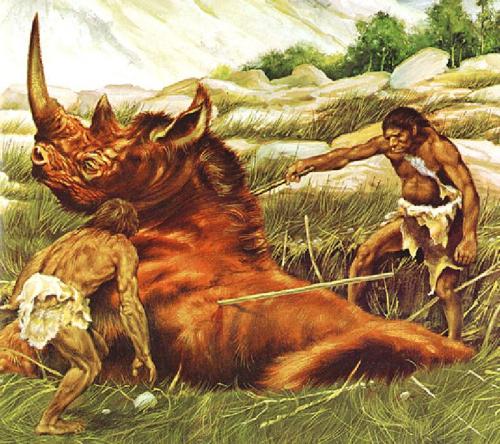 Our ancestors engaged in some serious cardio exercise just to get food. No walking down a supermarket aisle for them.

And now, the New York Times joins in the fray with Gretchen Reynolds’s article Exercise and the Ever-Smarter Human Brain.

She cites a study on Endurance Running that posits our caveman ancestors survived by becoming endurance athletes, “able to bring down swifter prey through sheer doggedness, jogging and plodding along behind them until the animals dropped.

“But simultaneously, in a development that until recently many scientists viewed as unrelated, humans were becoming smarter. Their brains were increasing rapidly in size.”

There have been a lot of reasons put forward to explain why the human brain is outsized in relation to the rest of the creatures on the planet.

Social interactions and the need for group activity in hunting has been mentioned as a contributing factor. Physical activity was never high on the list.

But physical activity causes certain substances in the brain to be promoted and it turns out these substances also stimulate brain growth.

“Those particular early humans then applied their growing ability to think and reason toward better tracking prey, becoming the best-fed and most successful from an evolutionary standpoint. Being in motion made them smarter, and being smarter now allowed them to move more efficiently,” Reynolds writes.

She cites John D. Polk from the University of Illinois at Urbana-Champaign and co-author, with Dr. Raichlen, of an article about the evolution of human brains in the January issue of Proceedings of the Royal Society concluding that “The broad point of this new notion is that if physical activity helped to mold the structure of our brains, then it most likely remains essential to brain health today.”

Maybe this will jog your memory in the coming year and spark some regular exercise in your daily life.