I wrote about this guilty pleasure over a  year ago and have since tweaked it and, in fact, don’t indulge in it anymore in its original form. Why repeat it? Because it is still delicious and I recommend trying it for yourself.  Also, I have included the tweak for you to try.

I haven’t written a Mr. Lazy Cook post in a long time, so I thought I might get around to one. For the most part Lazy Cook posts have been simple, delicious and highly nutritious meals. This one not so much.

I happened upon this sandwich one day almost by accident. You know how creative people always say that they saw the idea elsewhere and simply improvised on it? Well, that’s what I did.

A little history here. A hundred years ago, it seems, I was working at Reuters in the Chicago Board of Trade building. It was high pressure on the news desk and we welcomed our breaks which were often too few and too short. One of our favorite mid-morning things was to send someone across the street to a little diner and order a couple of their wonderful fried egg sandwiches. What made them so wonderful? Well, some culinary genius in the diner decided that instead of a mundane bread or toast on the egg sandwich he would substitute cinnamon raisin bread. In addition, he topped off the sandwich with melted cheese and bacon. So, it was ended up being a grilled cheese, bacon and egg sandwich on cinnamon raisin toast. My mouth is watering just remembering it. By the way, I make no claim as to the nutritional value of this creation, only its flavor. In fact, I was bumping up against the 175 pound level in those days.

So that is the origin of my guilty pleasure.

Here is how my ‘creation’ came about. First of all, I love peanut butter. I start every morning with a spoon full of peanut butter dipped in coconut oil before I set off on my bike ride. First thing in the morning I like to get out on the bike as early as possible, so I just fuel up with that. That way I don’t have to stop for breakfast or hang up my body digesting when it should be driving the pedals on the bike. Often, before walking the dog at midday, I will stick a tablespoon into the peanut butter jar and take one for an energy snack.

So, my guilty pleasure starts with peanut butter. 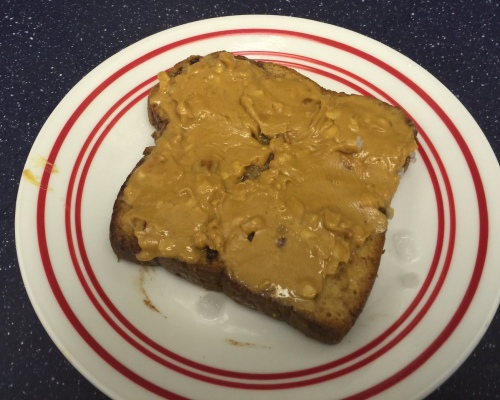 Here it is on toasted cinnamon streusel bread

I was thinking about raisin cinnamon bread while at Costco recently and stumbled upon Kirkland Cinnamon Streusel. I had heard of streudel, but not streusel. What the heck, I took a chance. I have found that you can’t go too far wrong trying something you never had from Costco.

My girlfriend and I enjoyed toasting up the streusel in the ensuing days.

As an old eater of PB&Js, I wondered how peanut butter might taste on that toasted streusel without the jelly. The sweetness of the streusel might work with the peanut butter. Turns out it did.

So, I was on my way to my guilty pleasure with toasted streusel and peanut butter melting on it. Yum.

But wait … how about adding coconut oil to it? I have learned over the past couple of years of consuming coconut oil pretty much every chance I get, that it adds a nice little under-flavor of coconut to dishes.

Here is my guilty pleasure. I toast up a slice of streusel, slather it up with coconut oil and spread peanut butter on top. It literally melts in my mouth. Magnificent. I often have it for lunch after a bike ride. It is also sweet enough to double as dessert.

Coconut Oil – one tablespoon. Calories 117, Fat 14 grams, No Sodium, No Carbs, No Sugar, No Protein

I have broken the nutritional facts down in this way in case you want to try one yourself with a different bread, wrap, whatever. You can substitute your own nutritional breakdown for that. If you do substitute or try mine, please share your impression.

Update: 22 March 2017 – Here is a nutritional breakdown for Pepperidge Farm Raisin Cinnamon Swirl in case you would like to try this sandwich with a lower calorie bread. One slice. Calories 80, Fat 1.5 grams, Cholesterol 0 grams, Sodium 100 mg, Carbs 15 grams, Sugar 5 grams, Protein 2 grams. As a former peanut butter and jelly sandwich eater, I want to recommend this on the basis of taste as well as nutrition. If you try it out, please share your impressions. I personally think this has such a nice sweet undertone to it, that I consider it half main course and half dessert. It is still a pleasure, just a little less calories and guilt.

2 responses to “My Guilty Pleasure – Updated”