Around 20 years ago a friend of mine was getting married and, as I was standing up, I thought it would be cool to have a tan. At the time, I was heavily into Abba music so I had no problem lying in the tanning bed listening to Abba while I tanned. Long story short, I sport a tan for the wedding and 15 years later had an operation ( my first of three) for skin cancer. I wasn’t addicted. Actually, this was my only ‘booth’ experience. Apparently, other folks aren’t so cool about tanning booths.

Despite the known dangers of exposure to ultraviolet light, many people continue to sunbathe and use indoor tanning beds with some users exhibiting a dependence to tanning. A new study from the Yale School of Public Health finds that such dependence is also associated with other addictive behaviors. 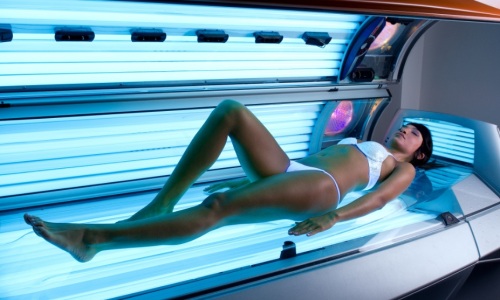 The study, recently published in the Journal of the European Academy of Dermatology and Venereology, surveyed 499 people who had previously sunbathed or used a tanning bed, and revealed that those who exhibited tanning dependence, also referred to as tanning addiction, were six times as likely to also be dependent on alcohol and three times as likely to suffer from Seasonal Affective Disorder (SAD). (my emphasis)

The connections between tanning dependence and other disorders revealed by the study represent an opportunity for clinicians to address those related conditions. “People who are tanning dependent could also be assessed for SAD,” said Cartmel. “There are ways of addressing SAD other than indoor tanning. Regarding the alcohol dependence association, it may be possible that addressing that behavior could help address tanning dependence.”

The underlying mechanisms for the addiction to UV light are not yet fully understood. According to other studies, “The biological rationale for tanning dependence is that exposure to UV light results in both melanin, and endorphin production,” said Cartmel.

She also added that there was another interesting preliminary finding: those with tanning dependence were five times more likely to exhibit “exercise addiction.” She said it is too early, however, to determine the implication. “Exercise addiction” itself has really not been well researched,” she said.

“One hypothesis behind the finding is that people who exercise excessively do so because they are very aware of their appearance, and they also feel that being tanned improves their appearance. Or it may be that we will eventually find out that these individuals have more of an addictive or risk-taking personality type. If you have one type of dependence, you may be more likely to have another addiction,” Cartmel said.

If you find yourself interested in reading more about skin cancer, check out my Page – Skin cancer facts in general (and my three skin cancer surgeries in particular.

6 responses to “Tanning dependence linked to other addictive behaviors – Study”