Can exercise and nutritional intervention improve muscle mass and function?

Eat less; move more; live longer is the mantra of this blog. I am always thrilled to run across studies that underscore those concepts. This one adds nutritional supplementation for additional benefits.
A study of the combined effect of exercise and nutrition intervention on muscle mass and function in seniors finds that exercise has a positive impact, with some possible additive effect of dietary supplementation.

Although sarcopenia, progressive muscle loss, is a natural part of aging, it is generally identified when muscle mass and muscle function falls below defined thresholds. Sarcopenia’s impact can be enormous as it affects mobility, balance, risk of falls and fractures, and overall ability to perform tasks of daily living. Given the aging of populations worldwide, public health and clinical recommendations to prevent and manage sarcopenia are urgently needed. 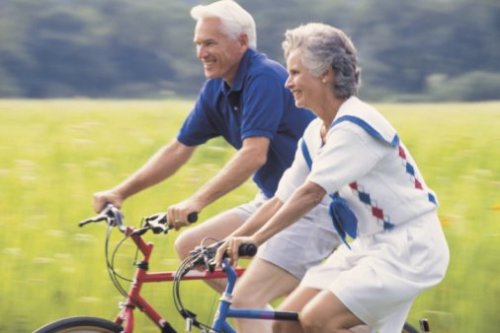 The new systematic review ‘Nutrition and Physical Activity in the Prevention and Treatment of Sarcopenia’ [1] summarizes the results of randomized controlled trials (RCTs) assessing the effect of interventions combining physical activity and dietary supplements on muscle mass and muscle function in subjects aged 60 years and older.

Following up on a previous study [2], the new study looked at a total of 37 RCTs. The studies were heterogeneous both in terms of protocols for physical exercise and in regard to dietary supplementation. The various supplements used included proteins, essential amino acids, creatine, β-hydroxy-β-methylbuthyrate, vitamin D, multi-nutrients and others.

Previous trials have shown that physical activity, and primarily resistance training interventions, have a positive impact on muscle strength and physical performance. Other studies have suggested that certain dietary supplements play a role in muscle mass or function. However, more needs to be learned about the synergistic effects of these two interventions.”

The review concluded that:

Physical exercise was found to have a positive impact on muscle mass and muscle function in healthy subjects aged 60 years and older. The greatest effect of exercise intervention, of any type, was observed on physical performance (gait speed, chair rising test, balance, SPPB test, etc.). Based on the included studies, mainly performed in well-nourished subjects, the combined effect of dietary supplementation on muscle function was less than expected.

Professor Elaine Dennison, Professor of Musculoskeletal Epidemiology and Honorary Consultant in Rheumatology within Medicine at the University of Southampton, noted:

Among the challenges in carrying out this study was the great heterogeneity in the RCTs, including in the exercise protocols and in the dosage of supplementation, all of which contributes to the variable findings between studies. Nevertheless, the results of the systematic review show the overwhelming positive impact of exercise interventions. One should also bear in mind that the majority of studies included in this systematic review looked at primarily healthy older subjects. It is likely that populations with nutritional or physical deficiencies would benefit more from nutritional interventions than well-nourished populations.”

The study authors point to a need for more well-designed studies assessing the impact of a combined exercise intervention and dietary intervention in frail and sarcopenic populations, and in populations suffering from nutritional deficiency or at risk of malnutrition. Furthermore, future studies should include rigorous documentation of the subjects’ baseline exercise levels and nutritional status prior to the implementation of intervention regimens.