I am a senior citizen as regular readers know. So, sometimes, I need to scale down exercises to be appropriate for me. There is nothing sadder than an injury sustained while exercising and trying to make yourself healthier.

So, I was pleased to read of the new research from McMaster University is challenging traditional workout wisdom, suggesting that lifting lighter weights many times is as efficient as lifting heavy weights for fewer repetitions. 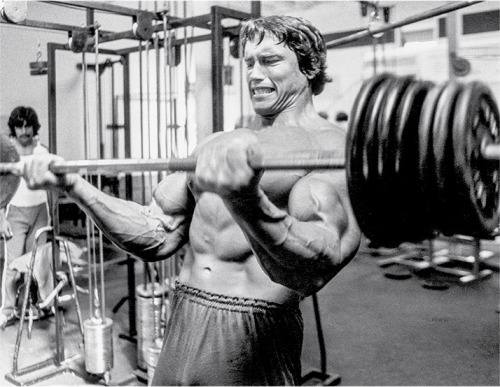 Thankfully, you don’t need to mimic Arnold to build your muscles.

It is the latest in a series of studies that started in 2010, contradicting the decades-old message that the best way to build muscle is to lift heavy weights.

“Fatigue is the great equalizer here,” says Stuart Phillips, senior author on the study and professor in the Department of Kinesiology.  “Lift to the point of exhaustion and it doesn’t matter whether the weights are heavy or light.”

“At the point of fatigue, both groups would have been trying to maximally activate their muscle fibers to generate force,” says Phillips, who conducted the work with graduate students and co-authors Rob Morton and Sara Oikawa.

While researchers stress that elite athletes are unlikely to adopt this training regime, it is an effective way to get stronger, put on muscle and generally improve health.

“For the ‘mere mortal’ who wants to get stronger, we’ve shown that you can take a break from lifting heavy weights and not compromise any gains,” says Phillips.  “It’s also a new choice which could appeal to the masses and get people to take up something they should be doing for their health.”

Another key finding was that none of the strength or muscle growth were related to testosterone or growth hormone, which many believe are responsible for such gains.

“It’s a complete falsehood that the short-lived rise in testosterone or growth hormone is a driver of muscle growth,” says Morton. “It’s just time to end that kind of thinking.”

Researchers suggest, however, that more work remains to be done in this area, including what underlying mechanisms are at work and in what populations does this sort of program work.

The findings are published online in the Journal of Applied Physiology.

For the record, I posted Weight training techniques for seniors a while back in which Dr. Anthony Goodman, in the course I took called Lifelong Health, said that seniors should concentrate on using lower weights, but do higher reps because they want to strengthen their ligaments and tendons as well as the muscles. Ligaments and tendons weaken as we age and lead to injuries that can really slow you down. Strengthening ligaments can also protect you from common aging problems like Achilles tendon rupture, rotator-cuff tears in the shoulder and hip and knee injuries. (my emphasis).

One response to “Heavier weight not crucial for muscle growth – Study”