McDonald’s – One Picture is Worth 1000 Words

This picture is one of those Pinterest gag posts that people put on their ‘Funny’ pin boards. An ironic juxtaposition of two billboards. The top one warning about childhood obesity and the lower one trumpeting that king of burgers – McDonald’s.

As the billboard says, “Don’t take it lightly.”

Obesity is not a joke. I don’t know how many times I have written “60 percent of us are overweight and 30 percent obese.” This is twice as many as 20 years ago. Even our children are getting fatter. Among young people, 15 percent of those ages 6 to 19 are seriously overweight. That’s nearly 9 million, triple the number of cancers that a person is vulnerable to. 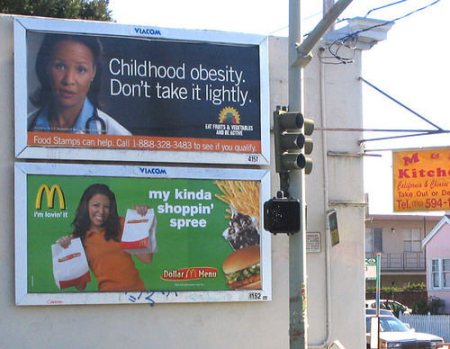 Also, a study published in 2013 by the National Academy of Orthopaedic Surgeons reported that the total number of knee replacement more than tripled between 1993 and 2009 more than tripled. They said the prevalence of overweight and obesity in the U.S. accounted for 95 percent of the higher demand for knee replacements, with younger patients affected to a greater degree.
So, if  you feel you ‘deserve a break today’ you might either miss McDonald’s or pick from their salad menu.
Tony