How About Sardines and Crackers from Costco?

I average going to Costco about once every seven to 10 days. For that reason when I saw sardines for sale there, I naturally took them as a new product. Now, I may have missed them previously, or the store may have moved them to a new position in the warehouse that became more obvious to me, but I don’t remember ever seeing them before. I like sardines and have been eating the Chicken of the Sea Brisling ones I got from a local supermarket. Naturally, I had to try the Costco ones. 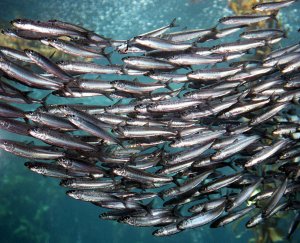 First of all, why eat sardines? The World’s Healthiest Foods site says, “Sardines are named after Sardinia, the Italian island where large schools of these fish were once found. While sardines are delightful enjoyed fresh, they are most commonly found canned, since they are so perishable. With growing concern over the health of the seas, people are turning to sardines since they are at the bottom of the aquatic food chain, feeding solely on plankton, and therefore do not concentrate heavy metals, such as mercury, and contaminants as do some other fish.

“While there are six different types of species of sardines belong to the Clupeidae family, more than 20 varieties of fish are sold as sardines throughout the world. What these fish share in common is that they are small, saltwater, oily-rich, silvery fish that are soft-boned. In the United States, sardines actually refers to a small herring, and adult sardines are known as pilchards, a name that is commonly used in other parts of the world. 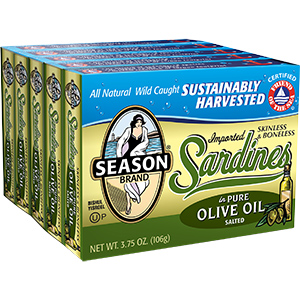 “Sardines are rich in numerous nutrients that have been found to support cardiovascular health. They are one of the most concentrated sources of the omega-3 fatty acids EPA and DHA, which have been found to lower triglycerides and cholesterol levels; one serving (3.25 ounce can) of sardines actually contains over 50% of the daily value for these important nutrients. Sardines are an excellent source of vitamin B12, ranking as one of the World’s Healthiest Food most concentrated in this nutrient. Vitamin B12 promotes cardiovascular well-being since it is intricately tied to keeping levels of homocysteine in balance; homocysteine can damage artery walls, with elevated levels being a risk factor for atherosclerosis.”

FITDAY said, “The small, oily fish contains various nutrients that promote heart health. Omega-3 fatty acids play a vital role in regulation of blood cholesterol levels. They help to lower bad cholesterol and maintain good cholesterol levels. The improved ratio between good and bad cholesterol helps to sustain good heart health. It also reduces the risk of stroke and cardiovascular disease. Vitamin B12, also found in high concentrations in the fish, helps to protect the walls of the arteries. This promotes cardiovascular health. The fish contains the antioxidant, Coenzyme Q10, which supports cardiovascular health.”
Last, but not least, they are great for a weight loss program, “The fish accelerates the body’s rate of metabolism. This increases the body’s capacity to burn fat. A healthy physical fitness program combined with a healthy diet helps to achieve healthy weight loss,” FITDAY said.

Since sardines directly out of the can are ready to eat they are perfect for Mr. Lazy Cook. I used to eat them with bread or crackers, but since I am trying to cut down on gluten, I am now using gluten free crackers from, where else, Costco.

I have to say that the sardines were a wonderful taste surprise. They are sold in olive oil and in case you can’t read the box, they are sustainably harvested; there is no BPA in the can lining and skinless. While sardines from other source usually have a salty taste, the Costco ones had no such thing. They were very delicate and subtle. I think they were the best tasting sardines I have ever had. 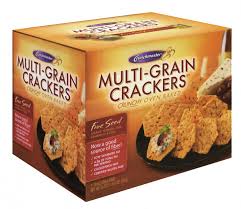 I ate them with Crunchmaster Multi-Grain crackers. These are a five seed, sesame, quinoa, flax, amaranth and chia.

The sardine can holds two servings and I ate the entire can. Nutritional breakdown:
Calories 312, total fat 12 grams, saturated fat 7 grams, cholesterol 35 mg, sodium 220 mg, no carbs, no fiber and 24 grams of protein. There are 1300 mg of omega 3s per can.

The crackers broke down as follows:
One serving is one ounce or 15 crackers
Calories 130, total fat 4,5 grams, saturated fat 0.5 grams, no cholesterol, sodium 110 mg, carbs 21 grams, fiber 3 grams and 3 grams of protein.

Besides being a quick and effortless lunch, this was a very filling and nutritious one. I can’t wait to have it again.

9 responses to “How About Sardines and Crackers from Costco?”