Weight Loss Lessons We Can Learn from the Saudis

When I think of the Saudis on the other side of the world from me here in the U.S., I get an image of oil fields, sand and great wealth, not much to do with great health. So, a recent article in The Wall Street Journal opened my eyes about the latter.

Regular readers know that I have railed repeatedly on these pages against the current state of our health. The following quote has appeared in several posts: “Some 60 percent of us are overweight including 30 percent actually obese. Another 10 percent has Type 2 diabetes, a preventable and ruinous disease that stems from inactivity and poor nutrition.” Lamentable as those facts are, an item in the Saturday edition of The Wall Street Journal makes us sound like a bunch of jocks compared with the Saudis. Unfortunately, the weight loss lessons to learn from them are of the “Don’t let this happen to you” variety.

“As World’s Kids Get Fatter, Doctors Turn to the Knife” The headline reads ‘world’s kids’ but the article focuses on the dire condition of Saudi children. The subhead says, “Obesity rates are soaring in Saudi Arabia and other wealthy Gulf states, leading to a boom in bariatric surgery on children.” 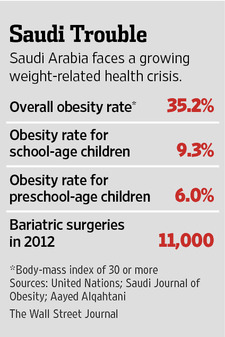 In the U.S. bariatric surgery is not permitted on anyone under the age of 14. In the Journal piece, they had a three-year-old weighing 61 pounds getting it. That 61 pounds is double the normal weight for a child that age.

The article mentions the ‘growing health crisis’ in Saudi Arabia and elsewhere in the Middle East. “Widespread access to unhealthy foods, coupled with sedentary behavior brought on by wealth and the absence of a dieting and exercise culture, have caused obesity levels in Saudi Arabia and many other Gulf states to approach or even exceed those in Western countries.”

The doctor doing the bariatric surgery on the three-year-old has done nearly 100 such surgeries on children under the age of 14 in the past seven years.

Where there is a weight problem you can bet that diabetes is not far behind.

“Some 20% of the Saudi adult population has Type 2 diabetes, a condition linked to obesity, according to the International Diabetes Federation, compared with 8.3% in the U.S., according to the CDC. The cost of diabetes treatment in Saudi Arabia is expected to rise to $2.4 billion in 2015, more than triple that spent in 2010, according to a recent study in the Journal of Family and Community Medicine,” The Journal reports.

The surgeon, Dr. Alqahtani studied at McGill University in Montreal and in Denver. “When he returned home to Riyadh in 2002, he says, he was inundated with pediatric patients so obese they were suffering from advanced stages fatty liver disease, diabetes and sleep apnea, a disorder in which patients repeatedly stop breathing for short periods during sleep—all diseases typically not seen until middle age.”

As quoted above, access to unhealthy foods, sedentary behavior and the lack of an exercise culture are responsible for these health horrors. The weight loss lessons to be learned here are that no matter who you are and how much money you have there is no escaping the basic requirements of good health – eat intelligently and exercise your body regularly. Don’t let this happen to you. Eat less; move more works every time.