WASHINGTON–Ground beef and chicken are by far the riskiest meat and poultry products in the American food supply and pose the greatest likelihood of hospitalization, according to a new report by the Center for Science in the Public Interest.  Furthermore, according to the nonprofit group’s analysis of more than 33,000 cases of food borne illness connected to products regulated by the U.S. Department of Agriculture, chicken nuggets, ham, and sausage pose the lowest risk of food borne illness.

The report, Risky Meat: A Field Guide to Meat & Poultry Safety, ranks 12 categories of meat and poultry based on outbreak reports and the likelihood of hospitalizations associated with the pathogens most commonly reported in those foods.  Ground beef and chicken are not only responsible for the largest numbers of outbreaks and cases of illnesses, but those illnesses tend to be more severe.  The deadly bacterium E. coli O157:H7, for instance, was responsible for 100 outbreaks associated with ground beef in the 12-year study period.  Because that pathogen is estimated to result in hospitalization in nearly half of those infected, ground beef had the highest severity index of the 12 meat and poultry categories.  Ground beef is also connected to illnesses caused by Clostridium perfringens and Salmonella.

“Outbreaks from ground beef and chicken are reported frequently, and all too often cause debilitating illnesses—illnesses that lead to hospitalization,” said CSPI food safety director Caroline Smith DeWaal.  “For example, approximately a quarter of those who are sickened by Salmonella will go to the hospital.  The hospitalization rate for E. coli infections is nearly 50 percent and for Listeria infections it is more than 90 percent. ”

“Meat and poultry producers must bear primary responsibility for keeping pathogens out of their products, but when it comes to beef, chicken, and other raw meats, restaurateurs and home cooks must treat them like hazardous materials and  take steps to minimize risk,” said CSPI senior food safety attorney Sarah Klein.  “Care should be taken to avoid spreading germs from the meat around the kitchen, and meat thermometers should be used to ensure that ground beef, chicken, and other meats are fully cooked.” 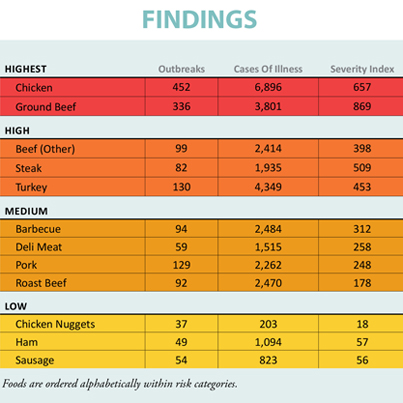 CSPI’s second tier, or “high risk” category of meats includes steak and other forms of beef, but excludes roast beef, which is of medium risk.  Steak is typically seared on both sides, which helps to kill surface bacteria, but E. coli O157:H7 is still a problem.  (The practice of mechanically tenderizing steak with blades or needles may drive surface bacteria into the steak’s interior, thereby increasing risk.)  With steak and other forms of beef, Clostridium perfringens was the pathogen responsible for the greatest number of illnesses.  Rounding out CSPI’s high risk category is turkey.  November and December are big months for turkey-associated Clostridium illnesses—indicating that holiday turkey left out on the table too long is partly to blame.

“Clostridium doesn’t get the same kind of headlines that its far deadlier cousins E. coli and Salmonella get, but it’s responsible for an enormous amount of foodborne illness linked to leftovers or food left out too long on the buffet,” Klein said.  “Keeping hot foods hot, refrigerating it within two hours of serving the meal, and using shallow storage dishes to ensure rapid chilling are all good strategies consumers can use to reduce their risk of getting sick from this common bacterium.”

CSPI’s “medium risk” category includes barbecue, deli meat, pork (excluding ham and sausage), and roast beef.  Listeria monocytogenes, though not a common cause of outbreaks, is a critical concern with deli meats.  That bacterium hospitalizes almost everyone (94 percent) who becomes infected, with the elderly, ill, and immune-compromised consumers being at greatest risk.  CSPI’s barbecue category includes beef and pork barbecue, but not chicken barbecue, and its pork category includes chops and roasts, but not ham.  With both of those categories, Salmonella, Clostridium perfringens, and Staphylococcus aureus are the primary pathogens of concern.

Chicken nuggets, ham, and sausage make up the “low risk” category, reflecting their lower frequency and severity of illnesses.  Norovirus is a common cause of infections from foods in this category, which suggests that improper food handling, such as insufficient hand-washing by restaurant workers, may be responsible for more illnesses than the foods themselves.

CSPI says that its assessment of food safety risk is totally separate from the risk of chronic diet-related disease presented by the saturated fat or sodium in meat and poultry products.  In other words, this analysis shouldn’t be interpreted as license to eat a lot more sausage, the group says.

Editor’s Note: I sensed a certain irony here in that the ‘safest’ meats included some of the most damaging in terms of fast foods and frequency of consumption. It is worth reiterating that while these fatty cooked fast foods won’t kill you in short order, they are still terribly harmful to your body over time.

Filed under Center for Science in the Public Interest, fast food