We are experiencing an early flu season this year, the earliest since 2003.  There is good news in that the Centers for Disease Control reports that this year’s vaccine is a very good match for the common strains circulating. I repeat my suggestion of October 10, “Get a flu shot.”

With that in mind, I wondered what are a body’s chances of coming down with it. WebMD, gives some really useful statistics on the flu.

Of particular interest to seniors, are:

I took a course from The Great Courses entitled “Lifelong Health: Achieving Optimum Well-Being at Any Age.”  The professor, Dr. Anthony Goodman, stated that for people over 65 influenza is the most common preventable cause of death. Additionally, vaccinations in adults could prevent about 80% of all influenza deaths. 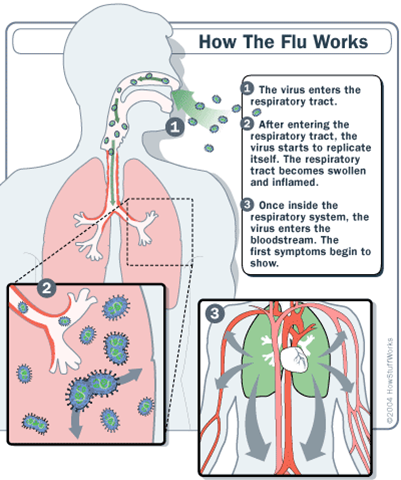 For the general population:

• Percentage of the U.S. population that will get the flu, on average, each year: between 5% and 20%.
• Number of Americans hospitalized each year because of flu complications: 200,000 on average.
• The number of people who die each year from flu-related causes in the U.S.: varies with a range of 3,000-49,000 people yearly
• In the U.S., influenza and pneumonia were the eighth leading cause of death in 2007.
• Number of flu vaccine doses available in the U.S. for the 2010-2011 flu season: 160 million to 165 million.
• In 2010, the CDC began recommending that everyone over six months of age get a flu vaccine as soon as it’s available.
• Flu activity usually peaks in January and February.
• The 2010-2011 flu vaccine protects against three different flu viruses: an H3N2 virus, an influenza B virus, and the H1N1 virus that caused the 2009 pandemic.
• It takes about two weeks after vaccination for an adult to develop antibodies against the flu.
• The typical incubation period for the flu is one to four days. Adults can be contagious from the day before symptoms begin through five to 10 days after the illness starts.
• A regular case of the flu typically resolves after three to seven days for the majority of people, although cough and fatigue can persist for more than two weeks.