How Much Weight Did I Gain in London?

I’ve been blogging the past week about a recent business trip to London and what I ate while there. I thought it might interest our American readers to know what types of traditional English fare they might encounter should they visit London, and more importantly, what eating it would do to their waistlines.

Many, many cuisines are available in London, of course, it is an international, world-class city after all, but I tried to stick to traditional dishes to experience them and see what would happen in terms of pounds (weight, not money) for me. 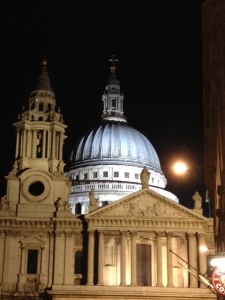 London's St. Pauls, as viewed from just outside my company's London office.

When I left home the Saturday before my trip for a weekend outing in Milwaukee to see alma mater Marquette play, I weighed in at 215.8. That’s about six pounds below where I started the year after my 2011 weight-gaining binge. We drove home from Milwaukee that Sunday and my wife dropped me at the airport for my overnight flight to London.

I count that as a traveling victory, given that I was not able to do my daily exercise routine and also that I spent several nights eating out, and drinking, with colleagues.

I tried to follow three simple rules while away; first, I never finished anything on my plates. Tony had calculated how many calories were in my English breakfast, for example, but I did not finish most of the items on the plate and so came in a bit under his estimate. The same went for my Fisherman’s pie and my in-room meals the first and last nights I was in London.

My second rule was to walk as much as possible while there. I burned calories with brisk walks whenever possible to have some way to exercise. The third rule was to limit the nightly drinking when out. I had only wine, not beer and its higher calorie count, and I nursed one or two glasses a night.

Hopefully, my experiences give you some tips you can use on your next business trip.

A postscript, by the Friday after my return (seven days), I was back down to 215.8 thanks to returning to my exercise and eating routines.
John