What About a Bubble on my Elbow?

I woke up from a nap on Sunday and it felt like my shirt had bunched up around my elbow. No amount of straightening seemed to help, so I took the shirt off to see if something was stuck in the sleeve. Nothing. However, when I felt around my elbow I found the problem. I had an almost golf ball sized bubble on it! The bubble felt like it was filled with fluid as it was very flexible. I experienced no pain of any kind.

Although I did not remember banging my elbow against anything, as a regular bicycle rider, I am forever knocking my shins on the pedals, skinning my knuckles and generally banging my limbs against the bike not to mention nearby objects . If I don’t draw blood, I don’t give it a second thought, so it is possible that I bumped it and forgot.

I couldn’t even figure a way to look it up on the web. How do you say “I have a bubble on my elbow?” So, I didn’t. 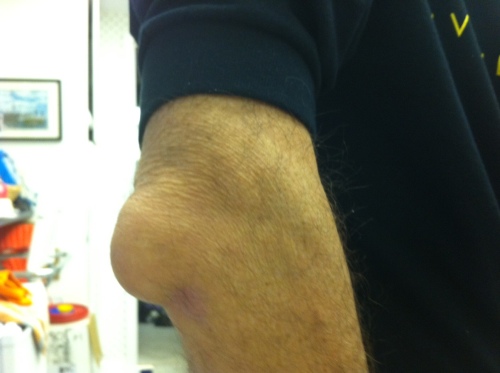 My version of Popeye’s elbow

My biggest concern was not that I had injured it, but that something had gone awry in my body. That was scary. I couldn’t wait to call my doctor on Monday.

My doctor said for me to come in and see one of her colleagues if she wasn’t available. That is one of the benefits of living in a big city and being affiliated with a major hospital. I live near Northwestern Memorial Hospital which is a fully staffed teaching hospital. I have written numerous posts about their wonderful “Healthy Transitions” program for us folks over 55 explaining the physical changes we can expect as we age.

I showed the nurse who took my vital signs my elbow. Before leaving she laid out a little place setting with a big needle as well as bandages and cutting instruments for the doctor. Not promising. My imagination kicked into overdrive ….

For the first time I realized that there might be some surgery in my very near future.

As it turned out after the doctor got a look at my elbow, he told me that he “hadn’t cut one of these in years” and didn’t plan on doing it with mine. A tsunami of relief washed over me!

“There are three general causes of olecranon bursitis:
* Inflammation, such as from pressure on the bursa or from inflammatory conditions. This is the most common cause of olecranon bursitis.
* A sudden injury, such as a blow to the elbow, causing bleeding or fluid buildup (biking?!)
* Infection caused by any of the following:
* An injury at the site of the bursa
* An infection in tissue near the bursa that spreads to the bursa
* A blood-borne infection. This is rare.”

He told me to pick up some Naproxin Sodium 200 MG capsules at the drug store. It is an anti-inflammatory and that I should take it for a week. Also, I was to let him know of any changes, like it becoming painful, etc. He saw no problem about my riding my bike.

So … I lived. I didn’t have to go under the knife. And, now I know what Popeye elbow looks like first hand.

The Naproxin Sodium did the trick. I had my elbow back to normal in about a week.

5 responses to “What About a Bubble on my Elbow?”